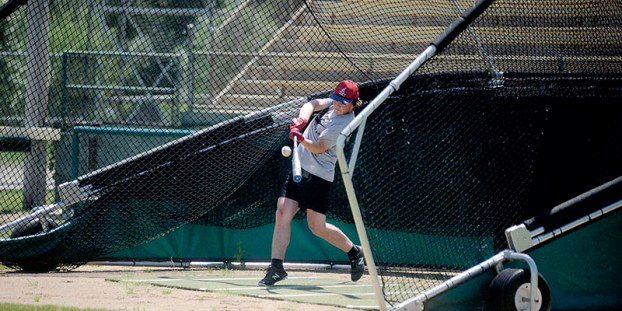 It was in late March when I first noticed that Marcusen Park was no longer empty.

Little by little, small groups of baseball players began showing up and finding their way to the batting cage to get some swings in or take to the outfield to shag some fly balls. 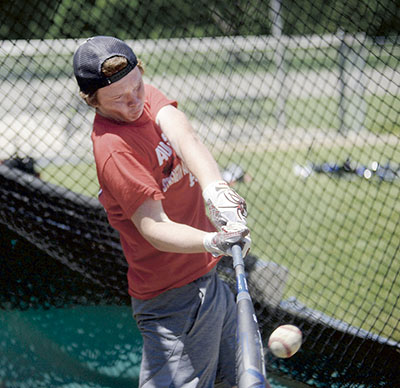 Kody Bloom of Austin takes a swing at Marcusen Park Monday. While there is no baseball season for Austin youths this summer, some players have found ways to work on their game. Rocky Hulne/sports@austindailyherald.com

It was a little sense of normality in a time of constant uncertainty under the dark cloud of the COVID-19 pandemic.

Those players didn’t have a spring season and now they won’t have a summer season as Austin Legion Post 91 and Austin VFW Post 1216 will not have a schedule; however, the players have still found their way to Marcusen Monday.

Nick Robertson and Kody Bloom, who will both be sophomores in the fall, were two of those players who were getting swings on Monday afternoon. They don’t have any games to prepare for, but the return to baseball workouts has brought a sense of duty for the boys of summer who have now been left without a season.

“It’s been a lot of sitting at home, but we try to stay active,” Robertson said. “We’ve been doing a lot of hitting and keeping our arms loosened up.”

Austin went to its first Minnesota Class AAA State Baseball Tournament in nearly three decades last spring and the Legion and VFW squads also went to state that summer. This summer though, has left players yearning for action and hungry to see a live pitch.

While Bloom knows it will be a long wait before his next at bat, he’s still hammering away at perfecting his swing this summer.

“It really is horrible, but it’s just something you go through. Hopefully next year, it’ll be back on,” Bloom said. “It’s such a team sport and it’s really fun making a bond with the people on your team. Taking that out on the field and having chemistry makes you play better as a team.”

With Minnesota headed towards Phase III in the COVID-19 recovery plan, there are some rumors that amateur baseball may be played this summer. But for now, those are just rumors and it may very well be an empty summer at Marcusen Park and Dick Seltz Field.

However, if players continue to put in the grind during the down time, Austin may just remain in the winner’s circle when next spring arrives.