Grand Meadow brothers have excelled in wrestling and racing

GRAND MEADOW — Parker Hale and Jackson Hale can’t think of their childhood without hearing the sound of a tire ripping through dirt or feeling the heat of a roaring engine.

The brothers, who are three years apart in age, grew up with a Go Kart Race Track in the back yard of their rural home located near Grand Meadow, they have always felt the need for speed, and they also built up a strong work ethic from years on the wrestling mat.

While they no longer wrestle, Parker, a 2016 Grand Meadow grad, and Jackson, a 2019 Grand Meadow grad and former state wrestling champ, have found a way to keep getting their kicks on the race track. 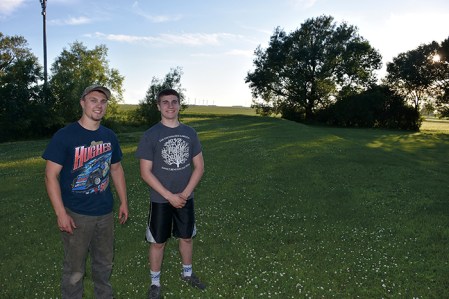 From left, Parker and Jackson Hale stand on the area that used to be a Go Kart track at their home near Grand Meadow. Rocky Hulne/sports@austindailyherald.com

“I think you live more in 18 or 25 laps in that race car than some people ever live in their lifetime,” Parker said. “There is no feeling like it, unless you’ve done it. There’s something about running right up by the wall at 80 miles per hour, throwing dirt, that’s fun.”

Some of Parker’s earliest memories involve him watching his dad Troy on the race track while sitting with his mom on top of the family camper. Parker also has a vivid memory of being five years old during his father’s last win, which saw Parker run out on the front stretch to celebrate with Troy.

Jackson has memories of learning how to drive a Go Kart in the back yard under Troy’s guidance.

“I remember he would sit there with a cone and he would stick his foot out,” Jackson said. “If we hit his toe, we knew dad was going to be mad and we would be off of our rhythm. Being a Hale, you learned to race and you love it.”

While Troy was a big role model to both of his sons, Jackson has also learned to follow in the tracks of his big brother. In a recent race at Fountain City, Wis., Parker was in dead last at 23rd place and Jackson was sitting in third place. During a break, Parker made a small wager with Jackson that he would catch him by the end of the race and that’s exactly what happened as Parker finished that race in second place.

“He likes to show off to me about racing, but that’s alright. I can always say I was the better wrestler. I’ve got that going for me,” Jackson said. “Parker is really good (at racing), I’m not going to lie. He can’t say it because then he would sound arrogant, but I can say it. I’m consistently getting better, but I’ve always looked up to him.”

Both Hale’s were crushed when the NCAA Wrestling Tournament, which was schedule to be in U.S. Bank Stadium, was cancelled due to the COVID-19 pandemic this year as they had planned on attending. While neither of them are currently wrestling, they both still use what they learned on the mat to help them on the race track.

“The nerves and the anxiety before you race is kind of similar to wrestling,” Parker said. “You know how to race and you know how to wrestle, but the anxiety gets to you because you want to know the outcome right away. When you’re waiting for a match, or waiting to pull out on the race track, I get the butterflies. You want to know if you’re going to make it off the track in one piece, if you’re going to win.” 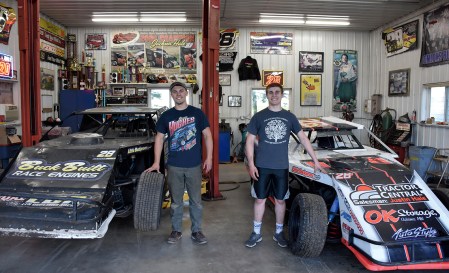 From left, Parker Hale, and Jackson Hale of Grand Meadow have built a lifetime bond on the race track. Rocky Hulne/sports@austindailyherald.com

Jackson showed he has what it takes to be an elite wrestler as he won a state title in his senior season, but he’s still figuring out how to channel his abilities towards racing.

“The harder I pushed myself, the faster I was in wrestling, the better I was. I went in guns blazing,” Jackson said. “In racing, it’s not the same. Sometimes you drive to hard and you can spin out or hit the wall. You can also be leading a feature and you can blow out a tire or you can hit the wall. In wrestling, you either won or you lost and it’s 50-50 either way.”

Jackson and Parker both noted how they like to keep their cars low budget and it’s been frustrating for them to see the ‘B’ mods become filled with more expensive cars.

That hasn’t stopped them from hitting the tracks nearly every weekend and they have made several racing trips down south, where they’ve hit up tracks like Lucas Oil Speedway  in Wheatland, Missouri.

There are still signs of the old dirt Go Kart track behind the Hale house. While it is covered in trees, one light pole stands tall and the other has fallen to the ground. The embankment of the track is still visible underneath the cover of grass, what served as the concessions stand is now an empty old building and the parking lot for the Go Karts  now looks like an empty field.

Troy has joked that he may pave the track again when he has grandchildren. If that happens, Parker’s favorite saying would serve as advice for any youngsters who may take a shot at racing.

Parker has excelled behind the wheel as he has won a pair of track championships at Fountain City, Wis., he won a Fall Jamboree at Deer Creek Speedway and he won on Disabled Veterans Night at Deer Creek in 2019 and he celebrated by doing 81 push ups to raise funds for disabled veterans. Parker never scored a state title in wrestling, but he advanced to state as a junior and took third place as a senior. Parker finished with 117 career wins.

Jackson picked won a sling shot championship at Deer Creek as a youngster and he picked up his lone feature win on Disabled Veterans Night at Deer Creek Speedway in 2017. In wrestling, Jackson was no stranger to the big stage. He took third place in state at 106 as a sophomore, he took fourth in state at 120 as a junior and he won a state title at 132-pounds during his senior year. Jackson finished with 159 career wins.

Hulne: Finding a way to stay in the game

It all started when I turned on my Nintendo and heard the phrase ‘Double Dribble’ speak to me. That was... read more