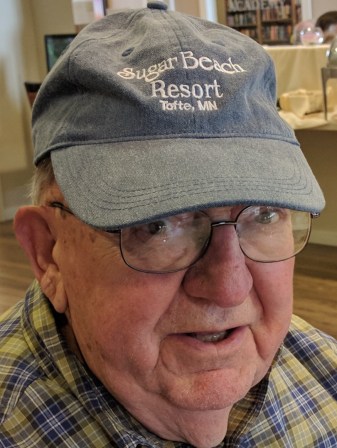 Fred Richard Kraft passed away peacefully at Aurora Transitional Care in Edina on June 15, 2020. He had phone conversations with his children in the last hours of his life, and his death was quick and decisive, and without preamble or drama. That was Fred’s way of doing things.

Fred was born in Austin, Minnesota on March 21, 1930 to 100% Czech parents, Anna and Louis Kraft. Anna was a homemaker and Louis worked at the Hormel meatpacking plant. Fred had two younger sisters, Helen and Mary. They lived in a modest 1 ½ story house; Fred’s bedroom was in the uninsulated attic and he would wake up with frost on his face some winter mornings. Fred attended Sumner Elementary School and graduated from Austin High School in 1948. Money was tight, and at one time, Fred held four jobs while attending school: setting pins at a bowling alley, delivering newspapers, cleaning at a bakery, and working at an arcade. Fred remembered his dad driving up to the Cities and dropping him off at the State Fair with just a nickel.

Fred earned a law degree from the University of Minnesota. He met Donna Cole while at the university and they were married on September 8, 1951. After graduation, Fred and Donna moved to back to Austin where they raised their four children. Fred was a devoted husband, father, and provider. The family attended Westminster Presbyterian Church where Fred was an usher and Elder. Fred was an attorney in Austin for over 35 years. During that time, he was Austin Municipal Judge and Mower County Attorney. Fred and Donna moved back to the Twin Cities in 1987, and Fred worked as a title examiner for Edina Realty until his retirement. They took full advantage of the city, walking regularly around the lakes, attending concerts at Orchestra Hall, and trying out the latest restaurants.

Fred and Donna, along with their growing extended family, took annual vacations to Hilton Head Island and to the North Shore (staying near the resort where they honeymooned). They traveled internationally extensively, and treated their four children and spouses to a Mediterranean cruise in celebration of their 50th wedding anniversary. Large holiday celebrations were hosted in their home until they were well into retirement. Their devotion to family created a strong extended-family foundation and bond for their children and grandchildren. Fred and Donna were members of Christ Presbyterian Church in Edina.

Fred’s beloved wife Donna died in July 2017. Fred missed her terribly, but remained active and engaged in his home and church communities. He retained a sharp and active mind, and read the Star Tribune, Wall Street Journal, and New Yorker magazine (covering the full political spectrum) religiously. He enjoyed sharing his thoughts and opinions on all topics. He had a remarkable memory for everything from sports statistics to details of family trips (his memories of family travels were often food-focused), to each grandchild’s birthday. Fred was known both for his thrift and for his extravagance (at one time the family had two Cadillacs) and generosity. He (and Donna) regularly made the grandchildren’s holiday wishes come true.

There will be a private family service. Memorials are welcome to People for Parks Minneapolis or Alzheimer’s Association Minnesota-North Dakota.