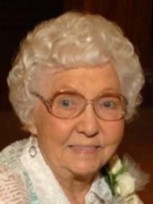 Doris was born on Aug. 4, 1919 in Madrid, Iowa. She graduated from Madrid High School in 1937 and married her high school sweetheart, Lloyd (Buster) Lincoln, Jr. on Nov. 24, 1940. They farmed north of Woodward until Buster’s death in 1988. She was a cook at the Madrid Lutheran Home and Boy Scout Camp Mitigwa. She worked at Federal Prescription (AKA Elmo Company and America’s Pharmacy) from 1962 until she retired.

Doris spent 30 years traveling and couldn’t wait for her next trip. She traveled throughout the United States including a cruise to Alaska. She visited Israel, Italy, Greece and Egypt. (Her favorite picture was of her riding a camel in Egypt.) Doris loved her family and always wanted to be wherever they were having the most fun. She loved a party, dressing in costume and playing games. She was the enforcer of the “Rules Of The Game” and often they were HER rules. She moved from Austin, Minnesota to Florida many times to be with her family and finally ended up at The Cedars of Austin, Austin, Minnesota where she was a resident for 8 years. Doris was a great cook and was well known for her chicken & noodles and her award winning cinnamon rolls. Doris attended First Christian Church, Madrid, Iowa as a child and was proud that she had received a perfect attendance pin every single year. Later she was a member of United Methodist Church, Woodward, Iowa, First Christian Church, Venice, Florida and First United Methodist Church, Austin, Minnesota.

A memorial service is planned at the Liberty Cemetery Cass Township, Woodward, Iowa for next summer due to Covid-19. Clasen-Jordan Mortuary is in charge of arrangements.