James Edward Slavan, 63, of Austin was sentenced to 69 months in the Minnesota Correctional Facility in St. Cloud for felony first-degree arson – dwelling – on Friday in Mower County District Court.

He received a concurrent sentence of 48 months in prison for felony criminal sexual conduct – victim under 13. 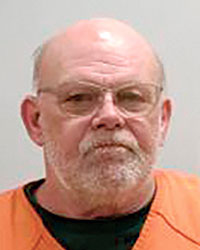 He received credit for 317 days served.

Court documents state that a woman called police on July 29, 2018, to report that a neighbor, later identified as Slavan, had tried to molest her 10-year-old daughter. The victim had brought her bike to Slavan’s house to get it fixed, but when her mother told her to go get it, she said she was “scared” of Slavan because he hugged her and tried to touch her breasts.

An officer retrieved the girl’s bike from Slavan and learned that he was previously convicted of a predatory crime.

The victim told police she and Slavan were in the garage when he began hugging her and put his hand under her shirt. She said he tried to kiss her, but she moved her face away. When she told him she had to go home, he said, “Not yet.”

Slavan was charged in connection to an Aug. 14, 2019, fire at 1201 Third Ave. NW. Court documents state that Austin Police and Fire were dispatched at 3:13 p.m. on Aug. 14 to the fire. The reporting parties indicated they were trapped and that the landlord, Slavan, had started the fire.

The tenant said Slavan was mad at him and had been harassing him and his friends. He said the harassment had been worse since reporting Slavan, who lived on the main floor, during a domestic situation several weeks before the fire.

He reported Slavan had been pounding on the door loudly demanding to be let in just before the fire occurred. After refusing to let Slavan in, the tenant said he saw drops dripping down on the floor by the door and fluid in the gap between the door and the floor. Within a few seconds he saw flames, which began to burn up the carpet. He also told police that Slavan had threatened to burn the house down around him a week prior.

Detectives found a gas can in the breezeway between the downstairs apartment and the garage. While photographing the doorframe from the breezeway to Slavan’s apartment, a detective located a lighter with a blue handle on the ledge just inside the doorway.

Slavan was later arrested in the 1100 block of Second Avenue Northwest.

Star Tribune Days have passed since negotiations broke down last weekend at the Minnesota Legislature and, regrettably, not much has... read more