An Austin man arrested after a report of a firearm discharged during a Sunday night domestic situation made his first appearance on Tuesday in Mower County District Court. 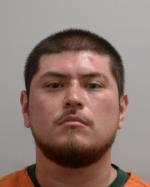 According to the court complaint, Austin police officers were dispatched at about 8:46 p.m. on June 21 to a firearms complaint in the 1800 block of Fourth Avenue Northwest after a report that someone discharged a gun inside the residence. Upon arrival, police observed several people standing outside and several females yelling and crying. One female had blood on her shirt. Four females, all of whom appeared to have blood on them, approached one of the officers. One of the females stated, “My boyfriend grabbed a knife and he’s the one that brought the gun.” She surrendered a firearm to another officer, who observed that the pistol did not contain a magazine.

Police then observed two male subjects fighting inside the residence. They ran inside and observed that both combatants had blood on them and there was blood all over the floor. They attempted to separate the two males, but they continued to try to fight. Two more officers then arrived and handcuffed Zavala while the responding officers placed the other male in handcuffs.

An officer asked one of the females who had been shot and she reported that Zavala fired the gun, but no one was hit by the bullet. She pointed to the upper portion of a door frame between the dining room and the garage, where the officer observed a bullet hole.

She also reported that the man Zavala was fighting with had been stabbed and his ear was cut. The officer observed that the man was bleeding from his left ear and he appeared to have several other stab wounds to the middle of his back.

While he was detained, the victim repeatedly said, “I was defending my family.”

Police observed that Zavala had blood on his arms and head and paramedics located a stab wound on his right forearm. Zavala reported that the victim struck him in the head with a beer bottle and indicated that he shot a gun at the victim and stabbed him in self-defense.

Zavala and the victim were both transported by ambulance to Mayo Clinic Health System – Austin.

Officers interviewed Zavala’s girlfriend (the victim’s sister), who reported that Zavala and the victim were arguing about family relationship problems and it escalated to physical fighting. She said the victim went to the garage with one of the women to calm down and Zavala then ran upstairs and got the gun. She said that as Zavala was getting the gun, he asked her, “What if I shoot his daughter?” She said he ran downstairs and her mother tried to stop Zavala, but he got into the kitchen. She said she came downstairs after Zavala shot the gun into the door frame, after which the victim  came back into the house from the garage, grabbed a bottle, and struck Zavala with it. She said Zavala and the victim then fought in the kitchen and Zavala was waving the gun around and threatening to shoot her mother.

Another female witness confirmed Zavala and the victim had an argument and reported seeing Zavala coming downstairs with a gun. She said he fired the handgun at the victim, but missed because someone in the house intervened.

Officers spoke to another female witness, who said that she heard a gun being fired while she and the victim were in the garage. She said she and the victim went around to the front door and she saw some females in the house grabbing Zavala, who had a gun in his hand. She believed they were trying to get the gun away from him as he was trying to reload it. She said the victim went back into the house and the gun was taken away from Zavala, who then grabbed a knife and started stabbing the victim in the back. She said she took the knife from Zavala and then she and the other women at the residence took all of the weapons and gave them to the neighbors.

Zavala’s girlfriend’s mother told police that Zavala had actually attempted to shoot her because he was upset that she was restraining him from fighting. She stated Zavala told her that he was going to shoot her, then shot the door.

Officers observed a shell casing on the dining room floor, as well as a bullet hole above the doorway going into the garage, but they did not find a knife.

Neighbors told police they were inside their house when some females ran over screaming for them to call 911. One neighbor said he could hear arguing and that he had heard a bang. Another neighbor said one of the women brought over a loaded handgun magazine and a butcher block of knives.

An officer observed a red-handled steak knife in the butcher block matching the description of the knife used to stab the victim. The knife appeared to have dried blood on it.

An officer spoke with the victim in the emergency room. He said Zavala was making aggressive gestures toward his sister and he believed Zavala was going to harm her. He said he confronted Zavala about it and Zavala then retrieved his firearm and shot it at him. After the shot was fired, the firearm was knocked from Zavala’s hand, and he then struck Zavala in the head with a beer bottle. He said Zavala then grabbed a knife and stabbed him and indicated he might have stabbed Zavala with the knife while trying to disarm him.

Medical staff advised police that the victim had been stabbed three times in the back and one time in the left shoulder/arm.

A detective spoke to Zavala’s girlfriend, who stated that when Zavala and the victim began to argue, both men went into the garage. She then heard Zavala say something and he went back into the house, went upstairs and removed a handgun from a bedroom. She said Zavala removed a gun lock from the handgun and loaded it before she could stop him. She then heard the slide move back and a round moving into the chamber. She said Zavala then ran downstairs with the gun and her mother saw him with the gun and tried to stop him. She said that while Zavala and her mother were wrestling in the kitchen, Zavala pointed the gun toward the garage and fired one shot. She stated that Zavala was intentionally aiming toward the garage.

Zavala will appear in court again on July 2.