Born on Oct. 27, 1913, on the Crow Indian Reservation near Lodge Grass, Montana, Joseph Medicine Crow was the grandson of Crow War Chief Medicine Crow, one of the most respected war chiefs of all time. His grandfather taught him the ways of the Crow warriors and he grew up hearing stories of the Battle of Little Bighorn from his step-grandfather, White Man Runs Him, who was a scout for Lt. Col. George Custer and an eyewitness to the battle. In 1939, he became the first member of his tribe to earn an advanced college degree, receiving a master’s degree in anthropology from the University of Southern California. He was working on his doctorate when the U.S. entered World War II in 1941. 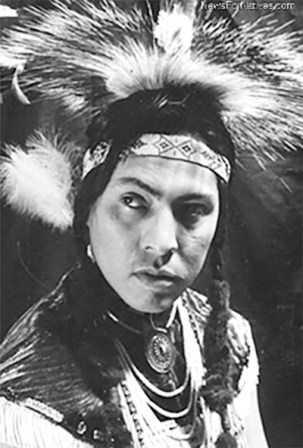 Medicine Crow took a job at the naval shipyards in Bremerton, Washington, before enlisting in the Army in 1943. After basic training, Medicine Crow was assigned to the 103rd Infantry Division as a rifleman and scout. On Oct. 20, 1944, the 103rd arrived in France to aid in the fight against Nazi Germany.

While overseas, Medicine Crow honored his tribe by wearing war paint beneath his uniform and a sacred yellow-painted eagle feather given to him by a medicine man, under his helmet when he went into battle. Medicine Crow also had a goal while overseas: perform the four dangerous tasks required to become a Crow war chief — lead a victorious war party, take an enemy’s weapon, touch an enemy without killing him, and steal an enemy’s horse.

When the 103rd attacked the Siegfried Line, the fortified border between France and Germany, Medicine Crow was tasked with leading a squad across an open field under heavy fire to retrieve dynamite from a destroyed American position. Upon successfully retrieving the dynamite, they again ran through heavy fire and used the dynamite to blow a hole through the German defenses.

The success of the mission meant that Medicine Crow had completed the first task.

After breaking through the Siegfried Line, Medicine Crow’s company assaulted a nearby German village. Because he was a scout, Medicine Crow was ahead of his unit when they were ordered to flank the heavily defended village. Separated from his unit, Medicine Crow was running through an alley when he collided with a German soldier. He quickly disarmed the German, completing the second task.

Instead of shooting the soldier, Medicine Crow threw down his rifle and began to fight with him. The German initially had the upper hand, but Medicine Crow was able to gain the advantage and began choking him.

In the Ken Burns documentary “The War,” Medicine Crow recalled the fight:

“I was ready to kill him, but then his last words were ‘mama, mama.’ That word ‘mama’ opened my ears. I let him go.”

The third task was complete.

Medicine Crow later recalled the last deed in an interview for the National World War II Museum in New Orleans:

“With the Crow Indians, capturing horses is probably the most important war deed a warrior can make. So, it just so happened one time in Germany, we were following some horseback riders, and it was getting late in the evening. Got their saddles off to sleep, you know. And my company came, and we had to surround them. I told the CO, ‘We got them surrounded. I’ll take their horses.’ We went down there. ‘Alright,’ I said, ‘open the gate.’ He opened it and boy, I chased them out of there. The soldiers tried to come out and get their horses. Boy, they shot them down, cleaned them up. The whole outfit wiped them out, about 40 or 50. And in the meantime, I took dead soldiers’ horses, about 50 of them.”

As the horses dispersed, Medicine Crow mounted one and rode away singing a Crow war song.

Upon his return home, Technician Fifth Grade Medicine Crow was made a war chief. He was the last surviving war chief and the last living Plains Indian war chief. He served as the tribal historian and anthropologist and was a spokesman for the Crow, frequently holding lectures at public universities, museums and historic sites. He was a founding member of Little Bighorn College and of the Buffalo Bill Historical Center in Cody, Wyoming. He also received honorary doctorates from Rocky Mountain College, Bacone College and his alma mater, the University of Southern California.

Medicine Crow continued to lecture until his death on April 3, 2016, in Billings, Montana, at the age of 102. He is buried in the Crow’s Apsaalooke Veterans Cemetery in Big Horn County, Montana.

The cactus are in bloom

As we move into summer, we are continuing  to take precautions in order to begin traveling again. Currently, we have... read more