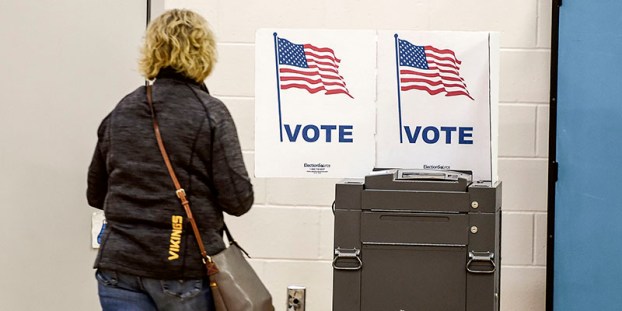 A voter approaches the voting machine to submit her ballot in 2018 at Southgate Elementary. Herald file photo

Voting from a distance: County gearing up for an election year that could include an influx of absentee voting

There is very little that has been left unaffected by COVID-19 and come November that could include how we cast our votes.

As the nation continues to grapple with the pandemic that has brought so many parts of the nation to a halt, the idea of mail-in voting is starting to see more attention as a way to curb risk of spreading the disease.

It’s a fight that swiftly turned partisan as Democrats look at it as a way to help flatten the curve as well as reassure the safety of potential voters, while Republicans have repeatedly resisted efforts claiming there is a higher risk of voter fraud.

“I have reservations about it,” said Doran Kasel, head of the Mower County GOP. “There’s a lot of issues all of us have seen. Issues with you can’t really verify who is signing it. It opens the door to potential fraud and it’s not the kind of safe election the way you would want it.”

While the fight is over mail-in voting, there are actually two different ways voters could cast a vote without visiting a polling place.

Mail-in voting is where smaller communities or townships are authorized by county boards so that all registered voters can cast ballots by mail or by visiting the auditor/treasurer’s office and casting it there before an election.

Absentee voting is done by first applying for an absentee ballot with some reason as to why they can’t or would rather not vote on Election Day. That application is then turned in, they are checked into a system and if authorized are sent a ballot.

The Minnesota Legislature looked at the possibility of mandating mail-in voting in the face of the COVID-19 pandemic, but partisan politics prevented any headway.

There is now an effort to encourage the idea of mail-in or absentee voting as a precaution against COVID-19.

“That’s where we sit right now, encouraging people to do it,” said Rep. Jeanne Poppe (D-27B). “I think definitely it’s been talked about trying to mandate it, to have it be a practice, but just this time especially with the pandemic. I think the end result is let’s make sure people understand the option and take advantage of it.”

However, pushback from the GOP has included pointing at the Wisconsin presidential primary in April, noting that they were able to still hold it without too much of a problem.

At the same time, it was reported that 52 people either voting or working at polling places tested positive for COVID-19 after the primary.

Despite that, Kasel pointed to the restrictions that were in place and that for the most part it worked out.

“Wisconsin had their primary protocol with social distancing and all of that can be accommodated decently,” he said. “I’m not sure how voting would be much more different than that.”

Poppe suggested that people should at least have the opportunity to vote by mail-in or absentee if they feel uncomfortable voting in person.

“I think there are just some people adamantly opposed to either requiring it in this fashion or they just have reservations,” she said. “It’s always easier to have it as an option.”

It’s too late to make any kind of move towards allowing mail-in voting for Minnesota’s August primary, but there would still be time to make the move for the November election.

Mower County Auditor/Treasurer Scott Felten said that decision would need to come from the county board given the division in the Capitol; however, he also explained that only the smaller communities in the county would be able to do it, leaving those in Austin to either vote in person or apply for absentee voting.

Currently, Elkton, Rose Creek, Mapleview, Taopi and Sargeant are the only Mower County communities that vote through the mail-in process.

He also said there are some benefits to the mail-in voting.

“The advantage is typically a higher voter participation and cost savings, frankly because of COVID-19 there’s a difficulty in having election judges,” Felten said.

Felten suspects there will be an uptick in absentee voting this year.

“I’m sure there will be more absentee voting this year and we’re preparing to accommodate that increase,” he said.

More absentee voting would take more time as applications would need to be processed. An Associated Press article Thursday indicated that it could take days to process an expected surge in ballots sent out through the mail.

“It may be several days before we know the outcome of the election,” Jocelyn Benson, Michigan’s Democratic secretary of state, said in an interview. “We have to prepare for that now and accept that reality.”

Felten and his staff are already eyeing making those changes among other adjustments as well.

“One of the changes that occurred is that polling places can be changed up to July 1 because of the situation, where before it was until Dec. 31 of the prior year,” Felten said. “Schools are not allowed to be polling places unless there are no other, locations or precincts.

That includes over half of the precincts in Austin as fiour of them would be affected.

Something else Felten’s office is looking at is relocating to better accommodate the influx of absentee and mail-in voting as well as to maintain social distancing protocols.

“We are looking at moving out of the office because of the space concerns, social distancing people in line and just the normal traffic that we would see in our building,” Felten said. “It just doesn’t seem like it would be able to accommodate the traffic.”

“The County Board would need to approve it if we decide that’s the best action to take,” he added.

Iconic locations in Austin will be illuminated red and green in honor of this year’s graduating seniors from two local... read more