USS Minnesota recognized as the Best Ship in Atlantic Fleet

The Virginia-class fast-attack submarine USS Minnesota (SSN 783), homeported at Naval Submarine Base New London, was announced as the winner of the 2019 Battenberg Cup Award last month. 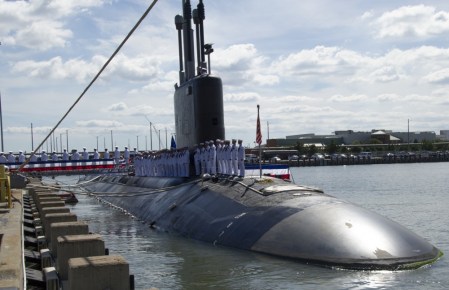 The Virginia-class fast-attack submarine USS Minnesota was recently recognized as the Best Ship in the Atlantic Fleet after winning the 2019 Battenberg Cup Award.
Photo courtesy of the United States Navy

The Battenberg Cup Award for the U.S. Atlantic Fleet Battle Efficiency “E” winner is presented annually to the ship or submarine, selected by the Fleet Commander as the best all-around in the Atlantic fleet based on accumulation of crew achievements.

Under the command of Cmdr. Thomas Flaherty, Minnesota’s crew achieved excellence in all aspects of submarine operations and was rewarded for their efforts.

“I am pleased to announce USS Minnesota as the winner of the Battenberg Cup for 2019, and offer my congratulations to the crew,” Grady said. “Every Minnesota Sailor should be proud of their record of sustained excellence and superior teamwork.”

As one of the highest performing submarines in the Atlantic Submarine Force, Minnesota sustained superior combat readiness throughout 2019 by rigorously and flawlessly executing deployed operations in the European Command Theater. The crew operated the boat in a manner that achieved unprecedented mission accomplishments while conducting multiple operations vital to national and theater security. 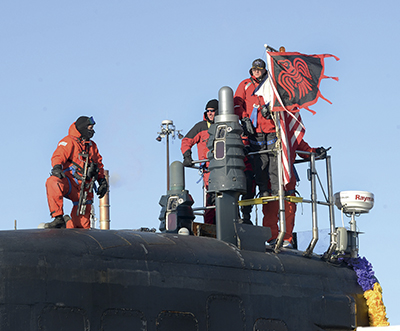 “The crew of USS Minnesota went above and beyond during their numerous operational commitments in 2019, and are incredibly deserving of this prestigious award,” said Vice Adm. Daryl Caudle, commander, Submarine Forces. “I am immensely proud of these warriors who have demonstrated sustained excellence in submarining, unbounded energy and professional enthusiasm. Thanks to their hard work and relentless dedication, Minnesota directly contributed to maintaining the undersea dominance of the Submarine Force.”

“It is a proud moment for our Viking team, and we are honored to receive this award,” said Flaherty. “I am extremely proud of my crew’s accomplishments, including a very successful deployment to the European Theater. The Viking team demonstrated sustained excellence across multiple mission areas and continues to exercise tactical initiative and expertise.”

USS Mitscher (DDG 57) and USS John C. Stennis (CVN 74) were also nominated as best all-around within their commands, and were congratulated for their performance.

“Outstanding achievements by the crews of each command made the selection process extremely difficult,” Grady said. “All finalists distinguished themselves by their exceptional performance, and can be justifiably proud of their accomplishments.”

Each year, the Battenberg Cup Award is presented to only one of the nearly 100 eligible surface ships, aircraft carriers and submarines, based on crew achievements. These include performance in competition for Atlantic Fleet Sportsmanship Award, Type Command Sailor of the Year Award, Golden Anchor Award, Ney Award and command excellence awards. Other information, such as operating schedules, commitments and unusual factors contributing to the nomination may also be considered.

Grand Meadow has been a model of success

GRAND MEADOW —Grand Meadow grad Zach Myhre was a wrecking ball on offense and defense when he played for the... read more