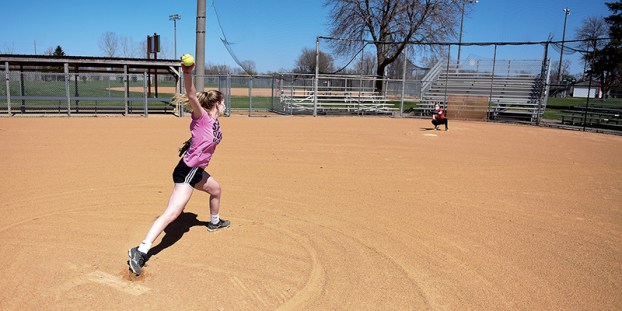 AJ Richardson and Destiny Gray got some time on the diamonds at Todd Park Thursday afternoon. Even though spring sports has ended because of COVID-19, athletes are still finding time to stay active. Eric Johnson/photodesk@austindailyherald.com

Time on the diamond: Despite the end of a season, some are still working on their game

It was a perfect day for softball at Todd Park on Thursday, but there were no games on the schedule.

There won’t be anything on the schedule for the forseeable future. 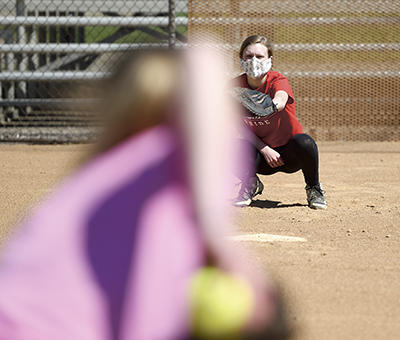 Destiny Gray awaits the pitch from AJ Richard as the the two took some time get in some ball at Todd Park Thursday.

But Todd Park drew a couple of visitors who had to get a touch of what they were missing. Austin seniors AJ Richard and Destiny Gray met up to toss the ball around and hang out as they reflected on what they’ve missed out on in the last two months during the COVID-19 outbreak.

Richard, who played volleyball and softball for the Packers, said she is more upset about losing softball than she is about her graduation day being affected.

“Having softball taken away, absolutely sucks,” Richard said. “Softball was for me and my friends, while graduation is for family. Losing softball definitely hurts more. I’ve played softball my whole entire life and it just fizzled out. In that last game you see all of the seniors crying and everyone trying to comfort them. I don’t get that memory.”

Gray is left thinking about what could’ve been. Gray took a break from competing for the Packers as she focused on her Post Secondary Enrollment Options studies at Riverland Community College the last two years, but she was considering coming back and playing softball this spring. Not only will she not be playing softball this spring, Gray will miss out on all other ‘rites of passage’ that happen for seniors in their final months in school.

AJ Richard pitches during some time out at Todd Park Thursday. Even though spring sports ended when the schools were shut for the season, some athletes were still able to get out. Photos by Eric Johnson/photodesk@austindailyherald.com

“I was thinking about catching my senior year, but now that it’s gone I don’t get to think about it. That’s hard,” Gray said. “As a joke, we’ve said that we’ve had the longest senior skip day in history, which is fun and everything. But we didn’t get to do a senior prank, we didn’t get to do Project Graduation and we’re not even sure if we’re having prom. They’re not even sure when we’re going to have our graduation ceremony. We’re missing out on a lot, but we can do other fun things to keep the memories alive.”

Gray said she’d like to organize a senior camping trip when it is safe to do so to make up for the time she and her friends have missed out on.

While they’re missing out on all of the fun of high school, Austin seniors have also had to take in an entirely new learning process. Instead of seeing her teacher face-to-face Richard has been struggling to find motivation to get on the computer and work from home.

Gray can relate to Richard’s struggles as she’s been taking online classes for RCC in the last two years. She said it’s all about finding a space to focus.

“I understand what they’re going through,” Gray said. “A lot of my friends have asked what works for me when I do online classes. Finding a quiet spot in the house where no one can bother you is the best place to be.”

While senior year is usually a time for seniors to celebrate their upcoming freedom, Richard and many seniors like her are struggling to find the bright side of the COVID-19 induced shutdown.

“It really sucks, to be honest,” Richard said. “Everyone talks about having fun with your friends during senior year, but I can’t do that because I’m stuck in my house.”

Jenna Grabeau is giving it her best shot when it comes to making sure that children do not lose their... read more