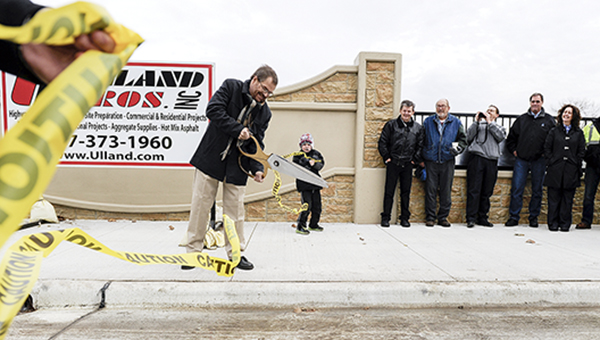 Mayor Tom Stiehm cuts the ribbon, reopening Main Street North in 2014. Stiehm announced Monday night that he will not be seeking another term as mayor. Herald file photo

In a move that surprised some city council members, Austin Mayor Tom Stiehm announced Monday evening that he would not be seeking reelection.

“Saturday was my wife’s birthday. I gave her what she says was the best thing I could have – I told her I would not seek another term as mayor,” he said.

Some of the major projects carried out during Stiehm’s tenure include the North Main Street flood mitigation project and the construction of the Austin Community Rec Center.

“I appreciate the mayor having been mayor for the past 14 years,” said Councilman Steve King (Second Ward). “I’ve loved being a city council member under you and you’ve done a good job leading the city.”

“No one cares more about the City of Austin than Mayor Stiehm,” said Councilwoman Laura Helle (First Ward). “I’ve been so impressed by his growth in the position since he first came in. I think that his knowledge base came way up to his heart and caring for the city over the years and I’ve really been impressed with that… Thank you Mayor Stiehm for your service.”

“You’re leaving Austin a better place than it was when you came in,” he said.

Councilman Jeff Austin (At-Large), who has been on the council as long as Stiehm has been mayor, said Stiehm has done an “admirable job.”

“We were elected at the same time and have served the past 14 years together and it’s been a pleasure serving alongside you and working with you,” he said.

Although he is not seeking a sixth term, Stiehm said he still intends to provide the best leadership possible during the remainder of his term.

“I will always be grateful to the citizens of Austin for allowing me the privilege of representing them for the past 14 years as mayor,” he said.

It’s an interesting time for the Austin basketball program. This last week has seen Austin native Both Gach signal that... read more