“Austin has helped me make the American Dream come true, and I want to serve this community that I have so much appreciation for,” he said. 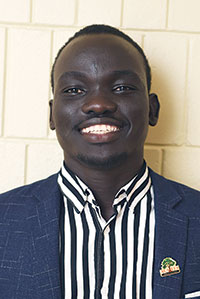 Originally from Ethiopia, Oballa lived in a Kenyan refugee camp for over a decade after fleeing genocide in his homeland. In 2013, he and his family moved to America in search of a better education and a better life. For the past several years, Oballa has lived, worked, and gone to school in Austin. He has earned educational certificates as a Certified Nursing Assistant and Trained Medical Assistant and graduated with an associate’s degree in human services from Riverland Community College in Austin.

He obtained American citizenship less than six months ago.

Oballa has been a member of the Austin Human Rights Commission since 2016. For the last two years he has worked at Riverland Community College to address students’ basic needs so that they can focus on school instead of wondering where their next meal is going to come from. He led an effort to open the first food pantry at Riverland College that is now a model for other community colleges across the state. Last year, he was elected as President of LeadMN, a statewide student association representing the 180,000 community college students in Minnesota, where he helped pass bi-partisan legislation to address food insecurity across Minnesota.

He will be running for the seat currently held by Councilwoman Laura Helle.

“I will use my proven leadership skills to help our community solve the key challenges of building a stronger economy, housing, and engaging our youth,” Oballa said.

Mike Postma announced on Wednesday that he has filed to run for Austin City Council in the Second Ward. “I’m... read more