The Minnesota Department of Health confirmed one new case of COVID-19 on Tuesday in Mower County, making the total number of positive cases in Mower County 33 since March 19.

Of those, 28 are no longer in isolation, according to Mower County Health and Human Services Division Manager Pam Kellogg.

The five that are still in isolation are the newest cases reported Monday and Tuesday. Kellogg said those individuals range in age from early 30s to mid 40s and that the cases appear to be associated either through work or a relative. 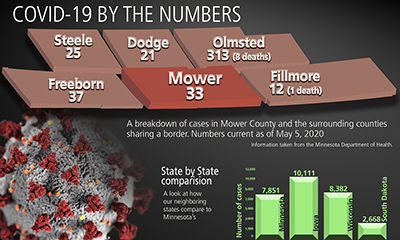 Mower County does not currently have anyone hospitalized from COVID-19.

Neighboring counties of Olmsted, Dodge, Steele, Freeborn and Fillmore have reported 313, 21, 25, 37 and 12 cases, respectively. Olmsted has also reported eight deaths and Fillmore has reported one death.

Statewide, Minnesota has had 7,851 positive cases since March 6, including 617 new cases reported Tuesday. Of that, 4,614 are no longer in isolation.

The MDH reported that 434 people were in the hospital from COVID-19 on Tuesday, including 182 in intensive care.

The number of deaths reported on Tuesday was 27, raising Minnesota’s total to 455 since March 21. Of that, 368 were residents of long-term or assisted living facilities. Those aged 70 and older account for only 17 percent of positive cases, but account for 82 percent of reported deaths.

Only five Minnesota counties, Cook, Hubbard, Lake, Lake of the Woods and Stevens, have not had any confirmed positive COVID-19 cases.

Hy-Ve announced Tuesday, that starting this Wednesday it will limit meat purchases at all of its locations. In the statement... read more