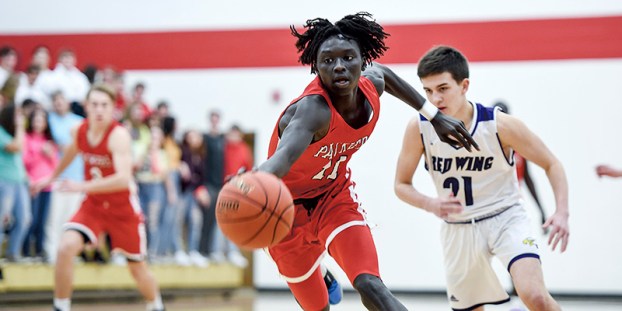 Austin’s Agwa Nywesh reaches for the loose ball for a steal and follow-up two against Red Wing. Herald File Photo

It’s an interesting time for the Austin basketball program.

This last week has seen Austin native Both Gach signal that he will not be returning to Utah next season, even if he is not drafted into the NBA, meaning that there are now three explosive former Packers on the college basketball market.

Agwa Nywesh, who previously decommitted from Division I Idaho State University, and Duoth Gach, who was the Mon-Dak player of the year at North Dakota State College of Science this season, also are searching for schools to play for next year.

I have no idea if there is any chance that any of the trio will be playing together or in the same conference next season, but the fact all three players who played for the Packers are drawing interest from high level basketball programs, shows how far the Austin basketball program has grown.

Quite frankly, the Packer basketball program is becoming a factory that pumps out great athletes and good kids, who all played in an incredible system under head coach Kris Fadness.

While Both and Duoth emerged with Austin at a young age, Nywesh wasn’t even on the varsity roster during his sophomore season, but his game grew by leaps and bounds over the last two seasons and his intensity on the court is second to none.

Another late bloomer, Ogur Gari, recently received an offer from Duoth’s alma mater, NDSCS, even though Gari only played in a handful of varsity games in his career after sustaining an injury.

Gari, a senior, showed a lot of potential as a shot blocking fiend early on for the Packers, and he could definitely continue to improve if he gets healthy.

If Gari ends up in NDSCS, there is a chance he could face off against Austin grads Ngor Deng and Dongrin Deng, as both of them played NJCAA Division I ball last year.

Austin senior Moses Idris will also be on the college basketball scene next season as he heads to Riverland Community College, where Austin grads Tate Hebrink and Nyagoa Obany started last season.

Hebrink will play at Valley City State next season and Obany will also likely have some opportunities to play at a four-year school.

Another former Packer to watch out for is Medi Obang, who didn’t finish the season at Lake Region College last year. Obang put up 1,000 points in two seasons with the Packers and he will be an excellent fit with the right program.

I’m looking forward to seeing where all of these Packers land and I’m ecstatic about the state of basketball in Austin.

The winners of the 2020 Eberhart Poetry contest were recently announced, though it was in a slightly different manner. In... read more