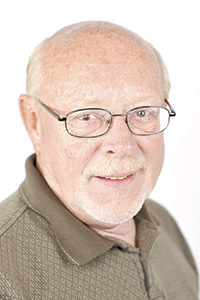 “I’ve been doing this for about 12 years now and I feel good,” he said. “I have so many connections from around the state that get me information and it helps us.”

Gabrielson grew up in Austin and ran an insurance business for about 30 years. He recalled that he attended his first county commissioner meeting in 2005 and continued to attend every meeting for over a year.

“They said, ‘Why are you here,’ and I said I wanted to learn how it works; I wanted to see if it was a good fit for me,” he recalled.

Gabrielson is a member of the Rural Minnesota Energy Board, a role he took on when former RMEB Chairman Ray Tucker asked for his help in bringing wind energy to Mower County. He has testified before the Legislature about wind energy on several occasions.

“With (wind energy) we’ve had very positive results,” he said. “The county brings in $2.8 million to $2.9 million per year in tax relief.”

Gabrielson gives some credit to his time working in insurance as being motivation to run.

Letter: A tribute to our fellow citizens, who gave their life in service to our country

This Memorial Day is unlike years past. No solemn memorial services or firing of guns in honor of our veterans.... read more