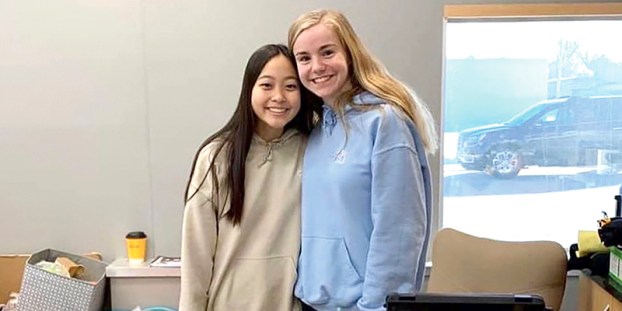 Katie Shin and Emma Keenan have made their business in the CEO program Keen Bee. Photo provided

Austin junior Mariah Ramos is determined to lift the spirits of young women and Pacelli junior Jayden Lewis wants to help save the environment, but they both hit a hurdle when the COVID-19 pandemic took hold around the time they were starting to get momentum in their projects for the Mower County CEO program.

The shutdown brought on by the pandemic caused all 20 of the students in the program to adjust their plans. The annual trade show will now be a virtual show that will go online Tuesday.

Ramos has been working on her project, BU Cosmetics, and she wants to empower all women of every color and every size. She was inspired to take that angle when she found her younger sister looking through fashion magazines and social media.

“She would always criticize herself and I would tell her to ‘be you,’” Ramos said. “The beauty industry advertises a perfect body and that causes judgement and women to criticize each other. I want to empower all women.”

After her grandpa had cancer, Ramos would like to use the makeup on cancer patients and people with chronic illnesses, but that is not a possibility with the current protocol. That is one of the many hurdles Ramos has had to leap over while working on her project.

“The biggest challenge is not being able to have that one-on-one connection and showing them where you’re coming from as a person,” Ramos said. “Technology has also been a challenge. I’ve been able to use the technology that’s already there. Before I was more of a paper and pen girl, but this has made me realize that you have to be ready for wherever life takes you. This is just one mishap and there are going to be others in the future. This is just preparing us for life.”

Emily Hovland, who is the facilitator of the CEO program, said that she has been impressed with all of the work the students in the program have put forth in uncertain and difficult times.

Besides the banning of social interactions, students have had to deal with products that didn’t ship or took longer than expected to ship. They’ve had to learn to practice patience and how to communicate online.

“People everywhere are having disappointments in things that are no longer going to be able to be done in the same way. They were looking forward to interacting with the community and showing their products and services,” Hovland said. “Ultimately, they just wanted to show what they’ve done. When we came up with the idea of the virtual idea, they jumped on board. They’ve had to adjust their own personal businesses, but for the most part, they’ve rolled with that. They found a way to keep moving forward.”

Lewis has made a business model of designing reusable straws and water bottles. He is offering 20 percent of his profits to the Minnesota Environmental Fund.

“I saw I had this opportunity and I wanted to do some good. I wanted to contribute in my own way,” Lewis said. “I care about the environment and this was my way to help out.”

Lewis has been selling his product through Facebook and Instagram and has gained a firsthand perspective on what it’s like to run a business through online services.

“It’s unfortunate that we have to be in this situation, but every successful company has to have some sort of e-commerce. You have to be able to sell online,” Lewis said. “It’s been a little up and down. There’s been a little bit of a learning curve, but I’m getting used to it.”

Hovland said the community has continued to offer its support for the CEO program, even in hard times.

“We’re incredibly grateful for the Austin community and what they do for this program,” she said. “We’ve seen a lot of support.”

The Mower County CEO Trade Show will go live on its Facebook page next Tuesday. Anyone can log on and view the students’ projects and purchase their products.

Showing respects for the fallen

Memorial Day is this Monday and it’s normally a time where people come out to honor those that have served... read more