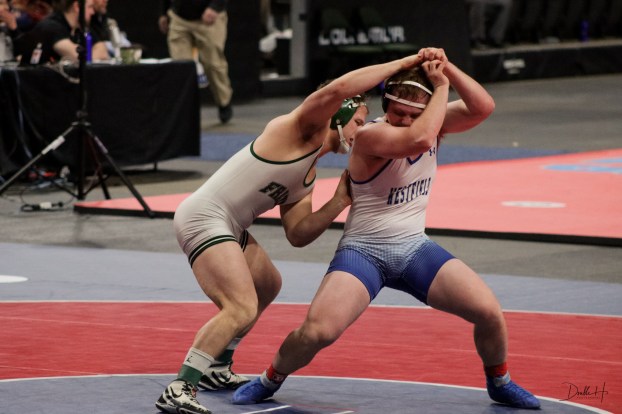 Colton Krell wrestles in the Minnesota Class A finals at Xcel Energy Center this past season. Photo by Double H Photography

BLOOMING PRAIRIE – Blooming Prairie senior Colton Krell thought he was having the best senior year he could imagine, but it got even better when he recently made his commitment to wrestle at Division I North Dakota State University next season.

Krell was pondering between wrestling at Rochester Community and Technical College or the University of Wisconsin when the Bison jumped in and captured his attention. Now he’ll be attending NDSU as a walk-on, with a chance to earn a scholarship in the future.

Krell is very familiar with NDSU’s roster and he used to wrestle with red-shirt freshman 174-pounder Michael Nelson, who is from Dover-Eyota.

“When NDSU called, I was instantly hooked,” Krell said. “I know who like half of the guys on the roster are and that’s a big pull for me. The North Dakota culture fits me better than any other school.”

Krell was Westfield’s first ever state wrestling champ when he won the Minnesota Class A title at 195-pounds this winter and he was a lineman on BP’s first ever state champion football team when the Awesome Blossoms captured the crown in Class A.

Krell finishes as the all-time wins leader at BP finishing his high school wrestling career with a record of 181-34 overall.

“Nobody is a more fierce competitor,” Gimbel said. “Colton is strong willed, he likes to do things his way to show that his way works too. His biggest strength is that he has a ton of confidence in himself and how he does things. As intense as he is on the mat, he is pretty laid back in everyday life. A kind of on-going joke is that when it comes to getting Colton someplace on time, we tell him 15 minutes earlier than he needs to be there.”

Krell has never had to look far for a role model as his older brother Dalton Henderson won a state title for Owatonna at 195-pounds in 2010. Henderson wrestled at Air Force Academy, but injured his shoulder in his first varsity match and never wrestled for the Cadets again.

The Bison wrestle in the BIG 12, which is the same conference as Air Force.

Krell is excited to be able to focus on wrestling year-round in college and has high hopes for his future. However, he’ll never forget about his past.

“When you think about it, it’s kind of nuts. It’s going to be a long time before someone else does it again, that’s for sure,” Krell said. “With the football team, that was huge for the town and everything and it was a great accomplishment. Walking into wrestling and winning it was a huge dream of mine. Getting both in the same year was phenomenal. You couldn’t ask for a whole lot more.”

A lot of the young wrestlers in BP look up to Krell and he would love to see the Razorbacks continue to pump out state contenders in the years to come. He also wants to see the BP football program continue its success.

“The football program is already phenomenal. We’ve been good for years and our coach is really, really good. It just took that special grade to get it going,” Krell said. “This is definitely going to help the football team even more. It’s going to inspire some kids and get them in the weight room.”

“As far as wrestling goes, that’s my biggest hope, honestly is to get a bunch of younger kids going,” he added. “I really hope I inspire some kids to wrestle. It’s a great sport and it should be good for the program.”

Austin ArtWorks Festival is focusing on using the arts to boost community spirit in a year when a large community... read more