Austin senior Dylan Hanegraaf has been an integral part of the Packer boys soccer team’s rise to power. Now he’s ready to take his game to the next level.

Hanegraaf committed to play men’s soccer and attend school at Division III University of Wisconsin-Superior recently and he’s thrilled for the chance to stay on the pitch.

“I fell in love with the game right when I started,” Hanegraaf said. “After the last high school game I played, I knew I had to keep playing. I love the game too much to quit on it. I’m super excited.”

Hanegraaf has played forward, defense and midfield for the Packers over the last three seasons. He helped lead Austin to three straight Minnesota Class A State Boys Soccer Tournaments including two third place finishes and three straight Big Nine titles. Austin has compiled a record of 50-7-5 overall over that stretch. 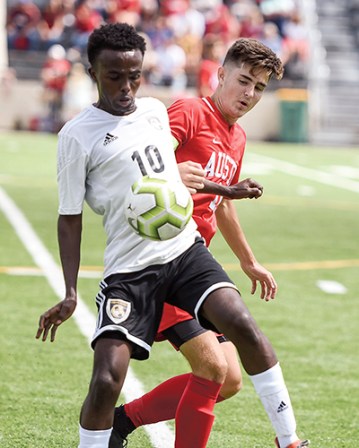 “It’s been amazing,” Hanegraaf said. “In my sophomore year I didn’t know everybody on the team, but it was good learning from those older guys. I learned to be physical. Every year I’ve gotten better and I try to get better every game.”

The Yellowjackets went 17-3-3 overall last season and its season ended in a 2-1 double overtime loss to Luther College in the second round of the NCAA Division III Championship.

On his campus visit, Hanegraaf was told that he’ll automatically have 30 new friends when he joins the team. He’s excited to play for a program that plays together, much like the team he played for in Austin.

“Their coach talked me into it. I’m big into family first and I think a team with chemistry can beat a team with skill. That’s what I like and that’s what they bring,” Hanegraaf said. “I also like the way the play. It’s a quick passing attack.”

Julia Works is a senior in Blooming Prairie. Q: What sports do you compete in? A. Volleyball, basketball and softball.... read more