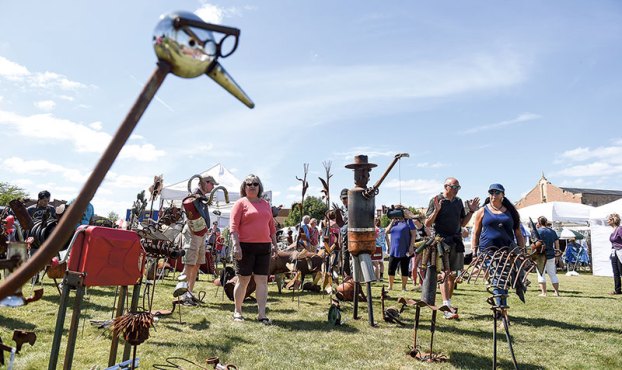 Organizers have announced the cancellation of the two-day festival in August, however, organizers are working on events throughout the summer to keep up the arts. Herald file photo

The Austin ArtWorks Festival has become the latest victim of the COVID-19 global pandemic — at least in part.

Organizers announced Tuesday that the annual festival, which brings hundreds of artists and performers to Austin each year in August, has been called off in its current form.

Austin Area Arts Executive Director Laura Helle said that while the main two-day event will be cancelled this year, organizers are working on spiritual successors.

“I think it’s probably more accurate to say we’re cancelling the large scale weekend with thousands of people,” Helle said. “We will be doing some kinds of art activities and whatever we can do to keep them safe.”

While organizers are working on a majority of those backup activities, one of them they are in the midst of is doing something for area graduating seniors.

“We’re planning for the second half of May to do what we’ve called the Austin ArtWorks (Graduation) Festival,” Helle said. “Activities will celebrate the 2020 graduates that we can do within social distancing.”

Organizers made the move to cancel the festival this early because of all the unknowns still coming down the pipeline along with the recent news that the predicted peak for COVID-19 cases in Minnesota is now expected to take place in July.

Should that peak come in July as predicted, the festival would still be left with questions of safety.

“We really felt like it’s really hard to know what the restrictions will be at that point in August,” Helle said. “Even if all restrictions are lifted, people are going to be hesitant. We thought we needed to make a call sooner rather than later.”

“It’s a difficult decision and it was difficult to know if it was the right time,” she added.

Overall, Austin Area Arts as an organization has been stressed like so many entities.

Its revenue streams have been hit particularly hard, further complicating the financial strain.

“It’s smart to have a real diverse revenue stream,” Helle explained. “We do, but it just so happens six out of our seven streams are either gone or severely cramped. We’re pretty pinched financially. We were able to get one of the administration paycheck protection loans and that gives us a couple months to keep doing what we were doing before we had to take some drastic steps.”

In particular, one of the organization’s steadier revenue streams was tied to charitable gambling, which is through a partnership with local bars.

Even when those bars do start coming back online there is the question on whether or not people will want to spend the money.

“There are tons and tons of questions and yes, lots of stress and concern on our end to keep things going,” Helle said.

Despite the cancellation of the festival, Helle said the volunteers working on organizing it deserve praise for their work.

A visit to a hospital or a clinic will always include a nurse who will take you through the process... read more