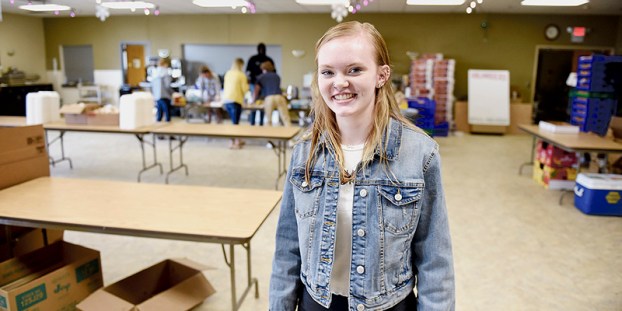 Austin High School student and member of the Austin Packer Dance Team has been putting in time and keeping busy by volunteering at the Mower County Senior Center. Eric Johnson/photodesk@austindailyherald.com

With skills learned from APDT, Molly Norton turns to volunteering

However, now she is using her skills to give back to her community.

Norton has been a regular contributor to the group effort in feeding seniors in Austin for the past month, volunteering to help prepare meals five days a week for two hours a day. Just like she has with the cheer team, Norton has helped keep the effort organized. 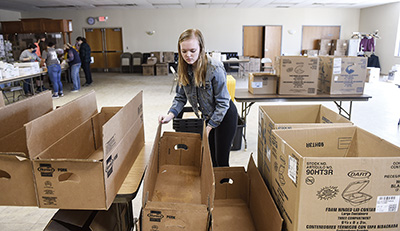 “I’m getting everybody organized and I’m making sure everyone’s doing their job. We need people on the bus and we need people to pack the meals and everything in between. I’m making sure people are doing that and I’m helping with it,” Norton said. “It’s very relatable to dance, because you have to work together to be successful. You just have to.”

Norton originally signed up to volunteer so she could gain hours for Austin’s scarlet cord program, which is an extra honor at graduation. But soon she found herself drawn to the idea of helping out those in need.

“After being here for two days, it felt like a regular thing. I didn’t feel like I was forced to come here. I enjoyed coming here and I still do,” Norton said. “It’s important and I’ve created bonds with people who I didn’t think I would have otherwise, not only with other students, but with adults. I knew who they were and they knew who I was, but it was more so because of my parents. But now it’s more on a personal level and I could come to them for a job reference if I needed to.”

Sara Schaefer, executive director at the Mower County Senior Center, said volunteer service from students like Norton has been vital to keep the food program running.

“It’s been great having somebody (like Molly) up here organizing the volunteers so I don’t have to do that,” Schaefer said. “We couldn’t do it without the volunteers. It’s been really nice to have such a joining of the community and the business. Everybody is coming together to get this done. Delivering meals to seniors in their homes is what we need to do to keep them safe. We’re going to do this pretty much every day until it’s safe.”

Norton said all of her grandparents are in the at-risk population and a couple of them participate in the meals program. She thinks of them when she’s logging in her spare hours, which are scheduled around her online schooling.

Norton hasn’t let the COVID-19 pandemic bring her down. She’s thinking about the stories she’ll be able to tell to future generations.

Hormel Foods and the Mower County Senior Center have been preparing food for nearly five weeks now. The food is delivered by Austin Smart Busses, with help from MCS volunteers and Spambassadors from the Spam Museum. More than 400 meals are delivered directly to the homes of area seniors. Each meal consists of nutritious foods such as sandwiches, pastas, hot dishes, salads, vegetables, fruits and desserts. The plan will be to continue providing the meals until the threat of the COVID-19 virus subsides.