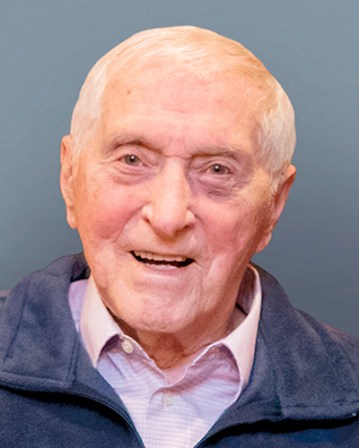 Vernon was born Feb. 3, 1922, in Adams to Joseph and Elizabeth (Mueller) Schaefer, the third of 12 children. He entered the U.S. Army in October 1942 and fought with the 10th Armored Division in France, Luxembourg, and Germany, becoming a cryptographer for Division Artillery Command HQ.

The war ended and Vernon was discharged in 1946. A few years later, with encouragement from local business leaders, Vernon opened a café (the Pine Room) and the Adams Theater. On June 15, 1949, he married Elizabeth (Betty) Ulwelling of Rose Creek, Minnesota, a new teacher in Adams.

Vernon and Betty enjoyed traveling in the U.S. and Canada and with other 10th Armored Division veterans for annual reunions and tours in Europe.

During his 90-plus years in the Adams community, Vernon served with the Volunteer Fire Department, on the Sacred Heart Church board and councils, the Adams Planning Commission, Adams Commercial Club, as mayor, and as co-chairman of the Adams Centennial Committee.

In 2016, after a fall at his home, Vernon sold his Adams house, built by his grandfather, and moved to Roseville, Minnesota.

A memorial Mass and gathering will be held in Adams later this year. Memorials are preferred to Second Harvest (2harvest.org) or a charity of the donor’s choice. Adams Funeral Home is in charge of arrangements.

Evan Lewis Kersten, 31, of Austin, Minnesota, passed away Wednesday, April 8, 2020, at his home in Austin. Services are... read more