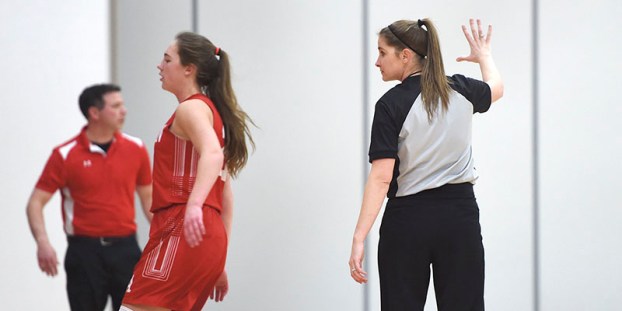 Official Mallory Harber holds for time as the Packers change players during a playoff game earlier this season. Eric Johnson/photodesk@austindailyherald.com

Teaching the rules of the game

Whether it be at home or at one of her two jobs, Mallory Harber is always teaching.

She teaches her young son the skills of life, she teaches the third graders of Banfield Elementary how to read, write and communicate and she teaches high school basketball players how to play within the rules moonlighting as a referee.

Harber has been officiating boys, girls and women’s junior college basketball games for nearly a decade, but she had to take a small step back this last year after her family grew by one member when she and her husband Mark welcomed a son. Harber has slowed down, but not completely. She still found time to ref once or twice a week, instead of her usual four to five nights per week.

“It’s amazing how your priorities change when you have a family,” Harber said. “But there was no question when I was coming back (to ref). It was just a matter of how many nights I would do it.”

Harber graduated from Blooming Prairie High School in 2006 where she played basketball, volleyball and softball for the Awesome Blossoms. She started officiating to pay back her student loans and once she joined the Rochester Association she moved up to varsity games rather quickly.

Harber has a passion to be on the basketball court and she doesn’t have any trouble finding the energy to run up and down the floor after a long day in the classroom.

“Teaching comes first,” she said. “I make sure that my students never get put on the back burner to a basketball game. I make sure I have everything done in the classroom first. It’s kind of a breath of fresh air to come to the basketball court after teaching nine and 10-year-olds all day. Officiating isn’t really like a job for me, it’s a passion for me.”

Harber has yet to ref any of her former Banfield students, but the day is likely right around the corner.

“I’m going to feel really old when that happens,” Harber said. “There are seniors this year that I’ve been reffing since they were in seventh and eighth grade. That’s where I started and now I’ve seen some of them go through and graduate. It’s fun seeing them progress through the years and it’s fun to see how they develop.”

The Minnesota High School League attempted to increase sportsmanship this past season as it encouraged fans and coaches to thank refs on social media. Like all refs, Harber has heard jeers in her career, but it’s not something that keeps her from loving her time on the court.

“Being a female official, there’s not too many of us out there and it can be a little different, but don’t act different and I don’t see it as different. I see it as just being an official,” Harber said. “One of the tough parts of being an official is the criticism, but if you can talk to people about it, it always ends up being a lot better.”

Hulne: Taking a moment to soak in the memories

While the sports world sits in a proverbial rain delay with no signs of letting up, it’s time to take... read more