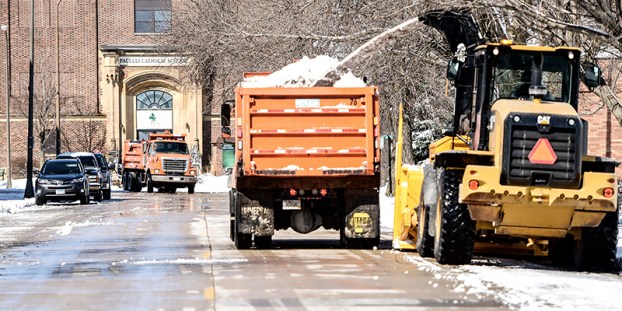 A City of Austin dumb truck turns down the street as crews clear snow from this weekend’s snow that brought around six inches of snow to the area. Eric Johnson/photodesk@austindailyherald.com

Storm dumps nearly a foot of snow in southern Minnesota

ROCHESTER — A spring storm dumped nearly a foot of heavy, wet snow in southern Minnesota, causing crashes and spinouts for travelers who chose not to stay at home because of the coronavirus outbreak.

The National Weather Service reported nearly 11 inches (28 centimeters) of snow at Elgin and about 10 inches (25 centimeters) at Wabasha and Oronoco. Winds gusts in excess of 35 mph were reported.

The Minnesota Department of Transportation said troopers were dealing with crashes Sunday afternoon especially along Interstate 35 south of the Twin Cities, I-90 between Albert Lea and Rochester, and U.S. Highway 52 between Rochester and the Twin Cities.

Minnesota Public Radio News reported that traffic was lighter than usual because of the holiday and Gov. Tim Walz’s stay-at-home order amid the coronavirus pandemic.

Winter storm warnings were in effect through early Monday from Worthington and Albert Lea north and east toward Mankato, Rochester and the southeast Twin Cities metro area.

— Herald staff contributed to this report

Patients and visitors required to wear masks at MCHS facilities