Bob was born on Oct. 15, 1924, in Austin, Minnesota, to Gust and Olga (Price) Baier. His father passed away when Bob was nine years old, so he began to work early in life. He worked on farms and the CC Camps prior to getting a job with the Hormel Corporation processing Spam. 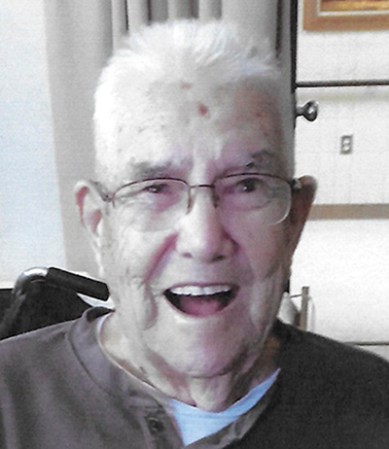 Bob served in the U.S. Navy during World War II on the USS South Dakota, which later became Battleship X. Upon returning stateside, he went back to work for Hormel and also owned the Dew Drop Inn hamburger stand in Brownsdale, Minnesota.

Bob and Elyce moved to Ely in 1967, where they owned and operated the Ely Laundromat. He also went to work for the U.S. Forestry Service in Ely for many years, retiring at 85 years of age. His hobbies included gardening, fishing, hunting, bowling, and sitting on his deck with his wife, family and friends.

Bob was a former member of the VFW, American Legion and Moose Clubs.

Bob is survived by his children, Elizabeth (Donald) Petersen of Austin, Robert (Sheryll) Baier Jr. of Ely, Patricia (Raymond) Marsnik of Ely and Barbara (Steven) Fultz of Babbitt, Minnesota; 12 grandchildren; 22 great-grandchildren; three great-great-grandchildren; several brothers and sisters-in-law; and several nieces and nephews. He was preceded in death by his parents; wife, Elyce, in 2010; sisters, Helen Barnett and Avis Baier; and brother; Roger Baier.

We wish to say thank you to Dr. Montana and the Care Center for the care given to Dad. He loved you all.

Funeral services will not be held at this time. Burial will be in the Veteran’s Section of the Ely Cemetery. Arrangements are with the Landmark Funeral Home in Virginia, Minnesota.

Letter: Turn to your local library