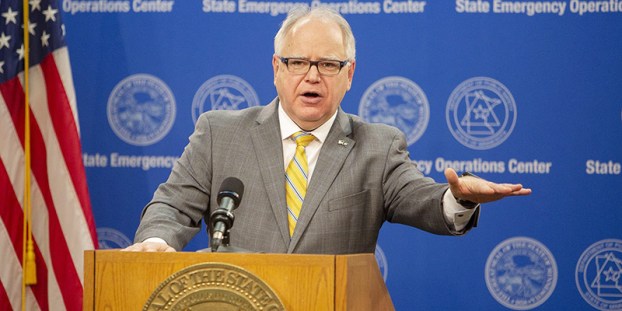 Gov. Tim Walz provides an update on the state's response to COVID-19 during a news conference Friday in St. Paul. His administration has been soliciting advice and crafting protocols for a safe return to workplaces in the weeks ahead. Christine T. Nguyen | MPR News

Pathway to reopening Minnesota should get clearer this week

More information should emerge this week about necessary safeguards to allow more businesses to reopen while keeping their employees and customers safe once the worst of the coronavirus pandemic passes through.

Gov. Tim Walz’s administration has been soliciting advice and crafting protocols for a safe return to workplaces in the weeks ahead. He planned to start the week with a conference call with state business leaders, whom he’s consulted before making prior announcements about restrictions.

His current stay-at-home order is due to run until May 4 — expiring in two weeks — and he hasn’t decided if a new one will replace it. Walz said Friday he’s carefully watching the COVID-19 trends and balancing it against economic concerns.

“We’ve done so well and that might be a double-edged sword for us,” Walz said. “I’m just afraid people are ready to bust out and this thing spikes up.”

Minnesota is in the midst of its biggest case spikes. As of Sunday, Minnesota had 2,356 confirmed cases and 134 deaths.

For context, it took more than a month between the state’s first test-confirmed case and No. 1,000. It took only 10 more days to double that, and the case count is moving up rapidly. By the same token, there were double-digit deaths for three consecutive days.

Walz has laid out three key assessments he’ll use to guide his decisions: Testing, tracing and isolating. He’s set a goal of conducting 40,000 diagnostic or antibody tests weekly, aggressive contact tracing to determine who infected people have associated with and isolating the sick until they’re no longer contagious.

Tensions remain high between the White House and the nation’s governors over who is responsible for what — from lifting restrictions to boosting testing. Walz and other state leaders were due to participate Monday in another White House-led conference call about strategies for ramping up testing quickly.

Some governors might use the chance to demand answers about inconsistent messaging from the president about what it will take to safely reopen. Last week ended on a bit of a sour note.

On Thursday, President Trump released specific benchmarks states should meet before they reverse their coronavirus restrictions. Not even 24 hours later,Trump was out with all-caps tweets aimed at a few states: “LIBERATE MINNESOTA!” “LIBERATE MICHIGAN!” “LIBERATE VIRGINIA!”

In Minnesota’s case, it coincided with a massive rally outside the Governor’s Residence.

“This is about making certain that we keep our liberties, including putting food on the table. Time to reopen Minnesota,” Republican U.S. Senate candidate Jason Lewis said as he drove through the rally in his RV, stopping later to take pictures with some in the crowd.

Walz responded that people have a right to voice dissent.

“But I also think when you’re advocating for really reckless behavior, that’s a different thing,” he said.

He told reporters he wasn’t sure why Trump had Minnesota in his sights. Walz hasn’t tangled publicly with the president to the degree of governors in harder-hit states like Illinois and New York.

“I’d like to know what they think we could have differently because again, we’re leading as we were asked. We flattened the curve. We built up our PPE. We kept Minnesotans alive,” Walz said. “And we’re moving people back into the workforce in a safe manner. I would argue we’re doing everything that they’re telling us to do but the difference is I actually have to do it here.”

Trump has yet to provide many answers about what he meant, but on Monday, he tweeted that he received a “very nice call” from Walz.

“We are working closely on getting him all he needs, and fast. Good things happening!” Trump tweeted.

Trump was asked at a press briefing if he was pushing the Michigan, Minnesota and Virginia governors to lift their stay-at-home restrictions — even though none of the states had met newly issued White House guidelines for doing so.

“No, but I think elements of what they’ve done are too much,” the president said. “I mean it’s just too much.”

He gave a similar answer at a briefing Sunday. NBC’s Chuck Todd tried to pin down Vice President Mike Pence during “Meet the Press.”

“Can you explain what the president is trying to ‘Liberate Minnesota’ from?” Todd asked Pence. “I don’t quite understand that use of language.”

Pence said Trump is eager to get the economy moving and worries about the damage inflicted so far.

“The truth is there are real costs, including the health and well-being of the American people to continue to go through the shutdown we’re in today,” Pence explained. “And so the president laid out guidelines for every state in the country.”

Walz said he too wants to get workplaces humming again and is working on protocols to do that. But he said he won’t compromise public safety in the process.

Several agency leaders are working on a framework to gradually let more businesses come on line if they can implement proper social distancing and adhere to other precautions.

Employment and Economic Development Commissioner Steve Grove reported Friday that more than 3,300 responses have come in to a call for suggestions — from plexiglass barriers at workstations to ways to check people’s temperatures and other health screenings at the door.

State Senate Republicans opened their own portal and said they’ve also gotten more than a thousand responses from businesses and workers. A bill up for a hearing Monday would allow businesses to apply to DEED to reopen if they submit a safety plan; the agency would have to provide an answer within three days of application.

“We need to trust our citizens, churches, nonprofits, and business owners to operate in a safe manner following all of the CDC guidelines,” Senate Majority Leader Paul Gazelka, R-East Gull Lake, said in a written statement. “The stay at home order is achieving its goal of preparing for a surge and now it’s time to save our economy and way of life.”

A new way of teaching

Educators are embracing teaching through the medium of online As the COVID-19 virus weight began to be felt in the... read more