Over 2,500 cases of COVID-19 reported in Minnesota

The number of confirmed COVID-19 cases in Minnesota exceeded 2,500 on Tuesday after the Minnesota Department of Health reported an additional 97 cases, bringing the total to 2,567 since March 6. 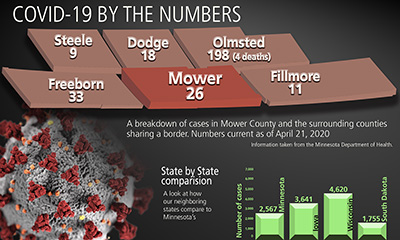 Of that number, 237 are hospitalized, including 117 in intensive care. The MDH reported that 1,254 patients no longer need isolation.

An additional 17 deaths statewide were reported on Tuesday, bringing them to a total of 160 since the first death was reported on March 21.

Mower County had no new additional cases reported Tuesday, keeping it at 26 since testing began. Neighboring counties of Dodge, Fillmore, Freeborn, Olmsted and Steele have had 18, 11, 33, 198, and 9 confirmed cases, respectively. Olmsted County has also had four deaths from COVID-19.

The Austin Area Chamber of Commerce Board of Directors has decided to cancel this year’s Fourth of July Parade because... read more