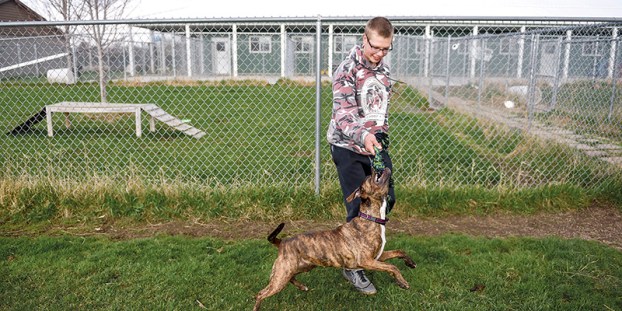 Monday morning, it was business as usual at the Mower County Humane Society, but aside the morning caring for the animals there are legitimate concerns the MCHS is dealing with because of COVID-19.

Since the day Gov. Tim Walz first shut the state down with his executive stay-at-home order, the MCHS has had to continue with its mission while working around the restraints of the order. Humane societies were not listed as essential and what that meant from the beginning was that it first had to stop all adoptions.

“I really do think we are a necessity,” said Kelly Rush, who countered with the fact that MCHS still had to care for animals coming into its care.

Andre holds court from on top of the cages at the Mower County Humane Society. Eric Johnson/photodesk@austindailyherald.com

That’s hard news for a place that was full to begin with, but now staff have had to start saying ‘no’ to people who have been calling about stray animals.

“Cats are still coming,” Rush said. “We’re still getting the same number of calls asking us to take kittens.”

This situation is made even more complicated because next door, at the City Pound, they have stopped taking cats all together and are only taking dogs.

Currently, the MCHS has 107 cats/kittens and 25 dogs, bringing the shelter to capacity.

For the first two weeks that the initial executive order covered, the MCHS hosted no adoptions days, but since the extension to May 4, it has begun adopting again on a limited basis.

When they saw places like Rochester going to more of an online adoption process, the MCHS followed suit.

People are required to first email the humane society to get an adoption form and then a meeting is set up between the individuals and humane society staff to determine first if  the match is right and secondly, round out the adoption.

Kelly Rush puts a cat back in its cage Monday morning at the Mower County Humane Society. Eric Johnson/photdoesk@austindailyherald.com

But while this has opened up the process of adoption, it is still severely constrained. Over the last month adoptions have lowered from 25-30 a month, to just six, which now has the added strain placed on resources.

Rush said that from places like Hy-Vee and in turn trickling down to organizations like themselves, food is becoming more difficult to find. She continued to explain that places like Chewy.com are urging pet owners to order farther in advance because of a drop in supplies across the board.

However, in the face of all this, Rush said the MCHS is still continuing their job of hosting the animals and working to get them adopted.

“We’re holding our own,” she said.

Initially, when COVID-19 did shut down the state and more people were staying home, the MCHS did see an uptick in adoption and Rush hopes that adoptions into good homes will continue, but as people begin looking towards the idea of adopting pets, she hopes they will take the time to think out the long term.

“They want a pet. They’re at home and they want a pet,” Rush said, urging people to ask the question, “But when you go back to work, can you still have a pet?”

A pup races down the lane behind the Mower County Humane Society Monday morning. Eric Johnson/photodesk@austindailyherald.com

• As of now, the MCHS’s Adopt a Pet Day has been moved from May 2 to May 30. To participate, adopters must have approved applications.

•The spring fundraiser, which is one of the MCHS’s major fundrasiers that was to include a car show, pancake breakfast and bake sale has been cancelled. In place of this, the society is accepting cash donations to help with ongoing costs.

•The annual rummage sale that was originally slated for May 28-30 at 1915 Fifth Ave. SE is still on.

The society is looking for useable merchandise and are currently accepting items excluding electronics, clothing, furniture and magazines. Items can be dropped off at the humane society up through May 23. Call 437-9262 to schedule a drop time.

• The annual Walk for Animals will be held on Sunday, Sept. 11.

Austin senior Kyra Walters found out she was a type 1 diabetic when she was seven years old, but she... read more