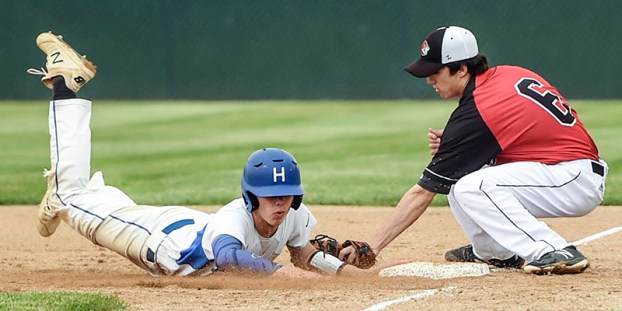 Hayfield’s Brady Nelson dives back into first just under the tag of Spring Grove’s Jonah Udstuen in the Section 1A Tournament last year at Riverland Community College. Herald file photo

Hayfield seniors taking the next step to RCTC

HAYFIELD – Hayfield seniors Brady Nelson and Jake Risius have been teammates and friends since they were elementary students. Now that bond will last for at least two more years as they have both committed to play baseball at Rochester Community and Technical College next year.

Risius has a steady bat as he hit .349 with four doubles and 20 RBIs last season, but he has also provided a lot of value behind the plate, where he has served as Hayfield’s catcher for the past two seasons. Risius and Nelson have had a few disagreements in the heat of battle over the years, but they’ve always found a way to stay on the same page. 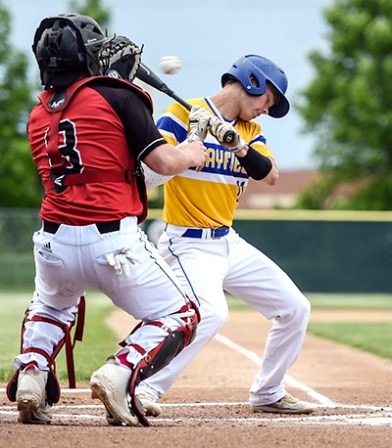 “I’m pretty excited about it. Brady and I have been good friends for a long time,” Risius said. “We have our arguments every so often, but we always figure it out. We don’t hold grudges against each other. We’ve gotten along very well for a very long time. I’m excited to be able to play with him for another two years.”

Nelson went 8-0 on the mound with an ERA of 2.82 last season and he hit .396 with eight doubles and 24 RBIs. By committing to RCTC, he will be following in the footsteps of his older brother Zach, who played two seasons with the Yellowjackets.

“I’m excited about it,” Brady said. “(Zach’s) told me a little bit about the things they do and the coaches. He kind of helped me make my decision.”

Both Risius and Nelson are glad to know that they will have more baseball ahead of them. Hayfield took fifth place in Class A in its first ever state tournament last spring, but the current season is currently in question due to the COVID-19 pandemic. Brady and the Vikings are hoping they get a chance to go out and play for Hayfield one last time.

“Baseball has been a big part of our friend group,” Brady said. “We’ve all played sports since we were in third grade and we’ve been really good at baseball for our whole lives. We’ve really been looking forward to this for awhile and we can’t play right now, but hopefully we can play later.”

RCTC was off to an 8-4 start this season before the NJCAA Division III season was called off. Zach had pitched in one game and struck out two, while allowing two runs in just over an inning of work for the Yellowjackets.

‘It was time to give back’

Tienda Y Taqueria Guerrero gives groceries to those affected by COVID-19 As some area residents continue to deal with unemployment... read more