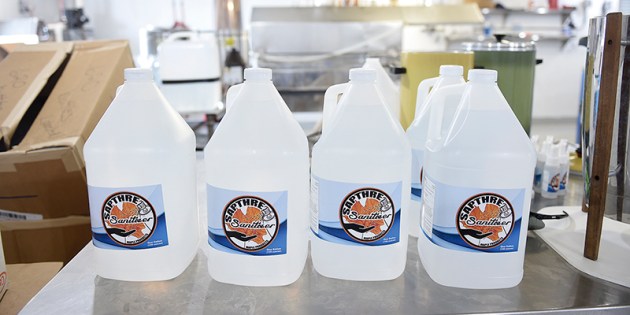 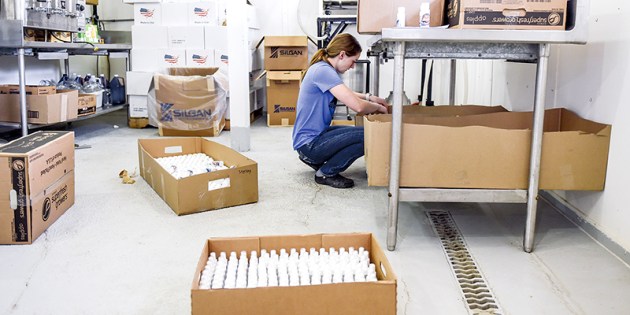 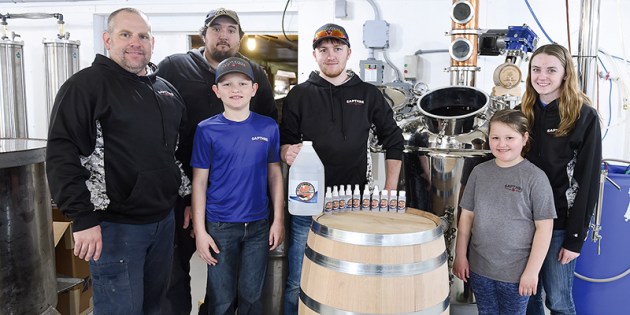 Kevin Sathre, left, has changed his whiskey operation to that of hand sanitizer in the face of the COVID-19 outbreak. From left: Sathre, Josh Loecher, Beau Sathe, Nikoli Yudin, Addy Sathre and Heather Harvey. Eric Johnson/photodesk@austindailyherald.com 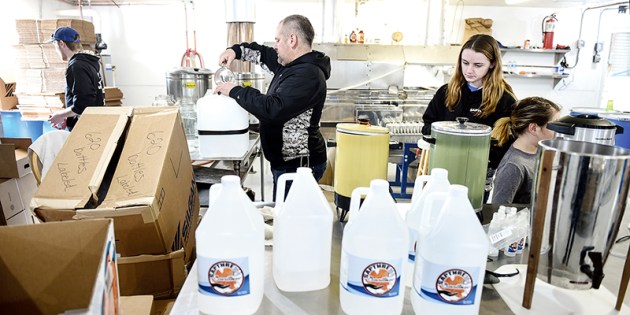 What started as an operation to create whiskey out of maple syrup has changed to making hand sanitizer in the face of COVID-19. Eric Johnson/photodesk@austindaily.com. 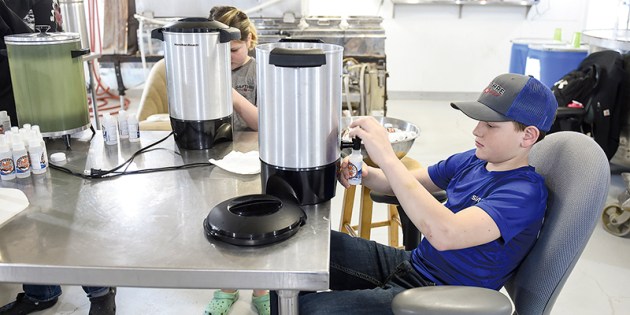 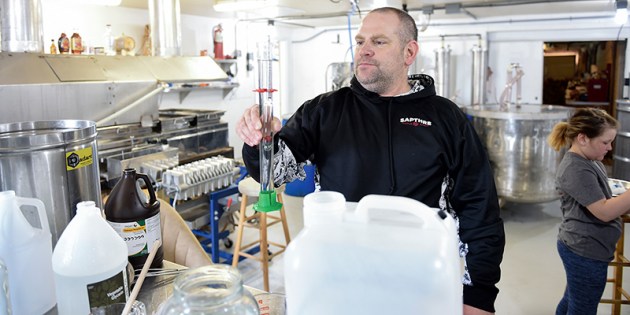 Kevin Sathre checks the alcohol content being using to make hand sanitizer. As the COVID-19 pandemic spread throughout the country and Minnesota, Sathre changed his whiskey operation to that of making hand sanitizer. Eric Johnson/photodesk@austindailyherald.com

Across the nation, alcohol distillers are stepping up to help supply hand sanitizer during the COVID-19 crisis.

With many of the materials already being on site with these distillers, the next step to making sanitizer is a fairly short step. Kevin Sathre and Nikoli Yudin of Adams are just two of the many distillers stepping up to the plate in making Sathre Sanitizer and the timing couldn’t have been better.

Sathre, family and friends have been making maple syrup for years and recently have been turning to the idea of distilling whiskey out of the syrup.

“It took us about three and half years in getting a distiller’s license, making whiskey out of our syrup,” Sathre said. “We had the first batch made and we were waiting for barrels.”

They had the whiskey — about 300 gallons of wort and 60 gallons of whiskey set for aging — ready for the barrels when they received an email from the federal government last month, letting them know they would be tax exempt on the industrial side, clearing the way for them to make sanitizer.

The timing was fortuitous in that the operation was ready to start production of the hand sanitizer right away.

“We got on it right away when the email came out,” Sathre said. “We looked at it, read it and said, ‘Let’s do this.’”

“We’re one of the distillers that got on it right away,” Yudin added. “Others are starting to get into it, but we were already doing this for a week. I drove to Milwaukee three times to get bottles, went down to Des Moines to get some of the ingredients, Rosemount … it definitely required a lot of traveling.”

From that moment it was all hands on the deck, including his family as well as his brother Ryan Sathre’s family and their extended family including parents.

“One of the cool things was the manpower,” Sathre said. “My immediate family stepped up big time. Nikoli’s girlfriend Heather (Harvey) has helped us a ton. We’re one family.”

With the mixing process underway, what remained was distribution, which was not only throughout the Austin and Adams region, but out into greater Minnesota as well.

“We’re still reaching out to others to see if they are in need,” Sathre said.

As of right now, the operation is okayed to make sanitizer through June 25, but Sathre and Yudin have pledged that they will continue production as long as is necessary.

There’s no limit on the hand sanitizer,” Sathre said. “We plan on providing for as long as we have bottles and supplies. We don’t foresee ourselves stopping until everything is restored.”