Bringing the show to your home 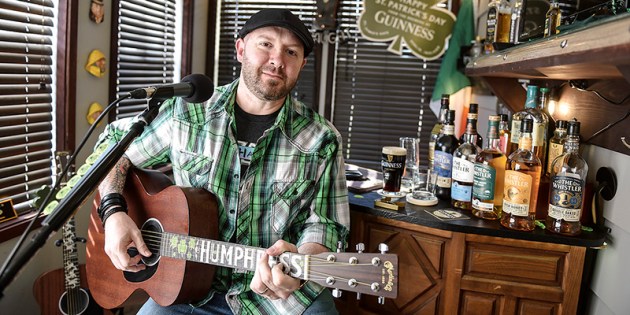 Jeff Humphress is one of several musicians both locally and nationally who are using Facebook to play performances live from home. Eric Johnson/photodesk@austindailyherald.com 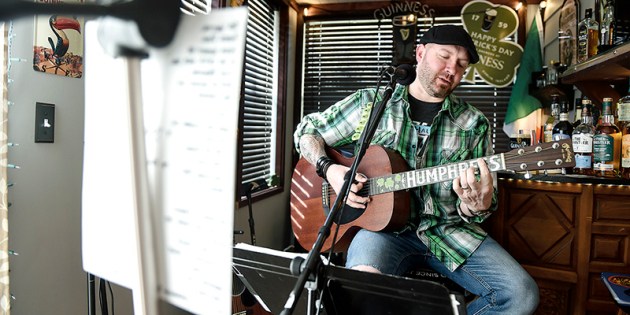 Jeff Humphress picks as he waits to start performing his Wednesday show from his home. Eric Johnson/photodesk@austindailyherald.com 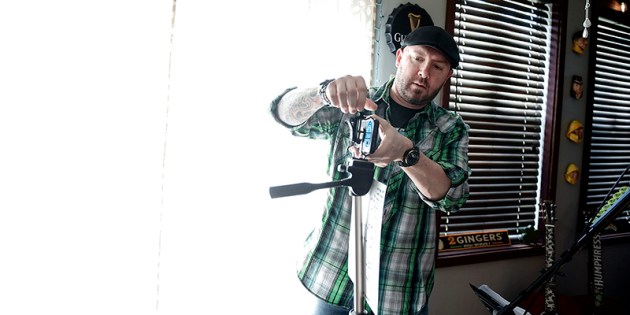 Jeff Humphress sets up his phone to record and broadcast his Wednesday performance. Eric Johnson/photodesk@austindailyherald.com 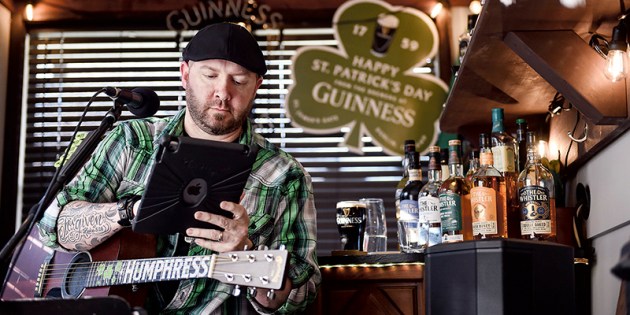 Jeff Humphress gets set up on an iPad before his performance on Facebook Wednesday night. Eric Johnson/photodesk@austindailyherald.com 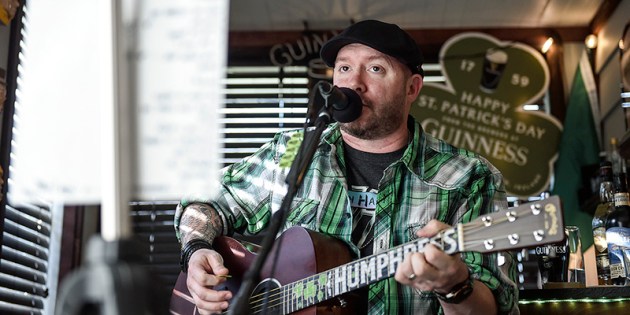 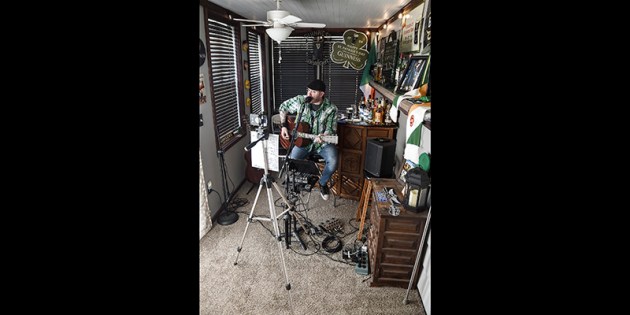 Jeff Humphress stage at home is a collection of stage and bar with an Irish pub influence. Eric Johnson/photodesk@austindailyherald.com 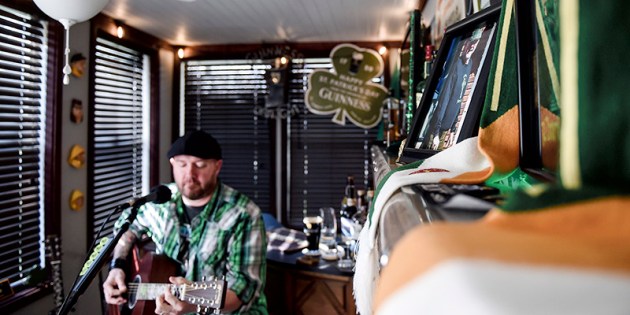 A portrait of Jeff Humphress’ dad Pat, looks over as Jeff plays during a Facebook Live performance from his home. Eric Johnson/photodesk@austindailyherald.com

Behind him, bottles of The Whistler brand whiskey are set up on the bar and the voices of customers waiting for the show can be heard mingling.

However, it’s not what you think. The stage is a converted room of the Humphress family home, the bar takes up just one corner of the small room and the voices are a track he downloaded from the internet.

Most importantly, however Humphress’ immediate audience is a single cellphone facing him just a few feet away. Humphress is preparing for a Facebook live show, an alternative way musicians are using in order to continue providing entertainment during the COVID-19 pandemic.

“It’s really cool,” Humphress said. “I get a lot more song requests and I get to speak freely. Usually, I have to wait until the end of the show. It’s a lot of positive stuff.”

Humphress has had a lifelong love of music beginning at an early age with heavy influence from his dad Pat Humphress, who introduced Jeff to many of the usual influences.

“I’ve been performing since 13,” Humphress said. “Dad got me started playing drums and guitar at 3-4 years old. There’s an audio tape somewhere on Christmas when I was four years old of me trying to play to Elvis Costello stuff he put on.”

Humphress continued playing music, joining bands and finding some local success playing in the Wichita, Kansas, area. Some of those bands found radio airplay and notoriety.

However, in 2005, Humphress, his wife, Kellie, and his family moved to Austin, so he stepped away from music for a bit.

“Since then I kind of tended to focus on family life,” he said, but as time moved on Humphress started playing again, this time as a solo act. “I’m just going to do this thing by myself and see what happens.”

What happened was a chance to play music in a setting that brought people closer to the music.

“It’s way more intimate,” Humphress explained. “I can either be background noise at a club or brewery or fully interactive and people are up dancing. It really depends on the venue. It lets me do my own thing.”

That was about a year and half ago and not long after, he started using the Facebook Live format, before COVID-19 started to interrupt life as we knew it.

“I love that there’s a lot more interaction and a lot less equipment,” Humphress said.

It also gave him more flexibility when it came to still being able to perform. In his mind, it was only a matter of time when it would become more of a regular thing.

“As soon as they started closing bars I figured it would be,” he said. “My main concern is as long as those businesses are doing fine, I’m happy.”

Humphress would play every so often, but has now started to become more formal in his scheduling of times.

While not the experience of being at a live performance in person, Humphress said that he has been getting good response from the public, who either watch his show live or watch the recorded versions later.

In some ways it’s gotten him a further reach.

“I’m averaging around 2,000 views a show,” Humphress said. “I had somebody from the Philippines watching (Wednesday) night. One cool thing about doing this is I’m able to be in a lot of places I normally couldn’t be like Ireland and the Philippines.”

“She’ll do a handful of songs with me and the people go crazy,” he said. “They love it. She’s amazing at it, but she won’t do it. It drives me nuts. People will ask ‘when’s Kelly singing?’”

Humphress isn’t the only artist taking part in the Facebook trend. Local musicians Rick McAlister and Jeff Reinartz make use of it. Todd Jamison, an artist in the Twin Cities Humphress knows, has also made the virtual rounds.

And as part of the trend, artists are helping each other and promoting their shows on their own Facebook pages.

“Absolutely and if you go on Facebook now you’ll see non-stop artists doing this,” Humphress said. “So many are doing it and it’s like, man this is crazy. It’s been a weird blessing in disguise.”

The opportunity has given people who wouldn’t ordinarily see his live shows a chance to listen to his music.

“My grandma has never seen me perform and she was able to see me,” Humphress said. “Mom lives in Arizona and she watches my shows.”

It’s even gotten him some attention overseas in the form of the whiskey distiller The Whistler, who will sponsor his show at 7:30 p.m. on May 2.

Rich in his Irish heritage, the chance to connect with Ireland has really been special for Humphress.

“Especially being Ireland, it’s a huge honor,” he said. “It’s kind of a dream come true. Kind of a bucket list item.”

The COVID-19 situation is a serious issue for everybody, but in the wake of this Humphress has found an appreciation for those people that take the time to listen.

“I want people to know how thankful I am that people tune in,” Humphress said. “I was telling Kellie, these people can be doing anything else but they’re sitting in their living room watching me.”

Upcoming online shows and where to find them.