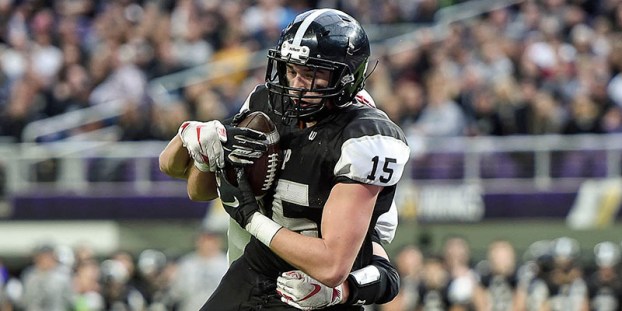 Blooming Prairie’s Karson Vigeland pulls himself to a touchdown agaisnt BOLD in the Class A Prep Bowl last November at US Bank Stadium. Herald file photo

BP’s Vigeland working through with positivity

BLOOMING PRAIRIE — Blooming Prairie senior Karson Vigeland has learned the definition of the word sacrifice this year and it hasn’t broken his spirit.

The first half of Vigeland’s senior year couldn’t have been much better. He won a state title with the BP football team as a starting defensive back and wide receiver, he committed to play football under an athletic scholarship at Division II Concordia-St. Paul, and he was the starting forward for the BP basketball team that was in the middle of a historically successful season.

Things went south in a hurry though when Vigeland went down in front of a packed crowd in Hayfield earlier in the season. His ACL was torn and his season was over. A month later he sat from the bench and cheered on his Awesome Blossoms to a Section 1A title, only to have the state tournament cancelled the next day. A few days later, Vigeland learned that he wouldn’t be able to see his friends on a regular basis anymore, and he may not get to compete in trap shooting this spring or even be able to have a graduation ceremony.

The COVID-19 pandemic and a torn ACL could’ve pushed Vigeland into a state of despair, but he isn’t willing to let that happen. Instead, Vigeland has learned to do what he can for others, while still staying positive about his own setbacks. He was a key mentor for sophomore Drew Kittelson during BP’s basketball season and now he tries to help out as much as he can at home.

“I’m always thinking what can I do for others, rather than myself? I learned that when I couldn’t really do anything with a blown out knee,” Vigeland said. “I did less for myself and I gave back to others who needed the help.” 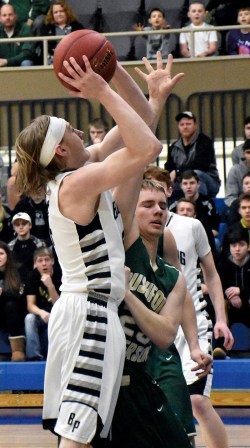 Vigeland has stayed motivated by going to physical therapy twice a week at Owatonna Sports and Physical Therapy and doing rehab in his house. He wears a mask when he goes to physical therapy, but he still works as hard as he can.

“I hope they don’t have to shut it down, because it’s really nice to still be able to see them,” Vigeland said. “It’s really tough. My friends really supported me with the ACL tear and now I can’t have facial interactions with them. But we’re all going through it together. I get texts from the guys and that’s a confidence boost to get back and work hard.”

Vigeland has worked hard to stay on top of his studies at home and he usually has all of his schoolwork for the week finished by Wednesday. He uses a big chunk of his spare time to work on strength and conditioning exercises inside the house. Whenever he gets tired or unmotivated, Vigeland thinks about Concordia and he imagines getting back on the football field again.

Athletes already qualified for Tokyo Games get to keep spots

About 6,500 athletes who already have earned their spots for the Tokyo Games are in for 2021 under redrawn qualifying... read more