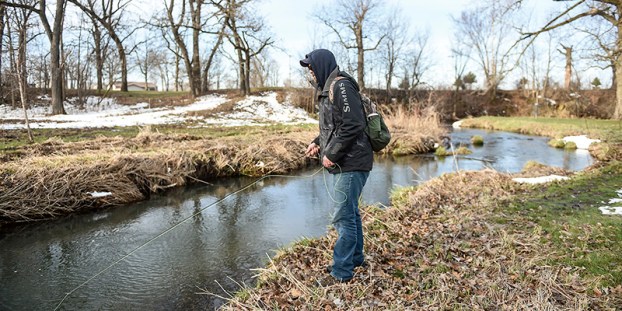 The trout season opened on Saturday and for the first time in a long time, that meant trout fishing in Austin.

On Thursday of last week, the Department of Natural Resources stocked Wolf Creek with 300 ready-to-take trout, making the stream a put-and-take stream.

James Fett, watershed technician for the Cedar River Watershed District, was among those out fishing over the pleasant sun-filled weekend.

It was Fett that got the idea of stocking Wolf Creek with trout rolling again two years ago. It was the first time trout were stocked in the Todd Park stream since a failed attempt in the 1980s.

He said that during the time he was there, between 2-7 p.m. on Saturday, he was seeing around a dozen people pretty consistently.

“I think people are really excited about it,” Fett said. “Everybody I talked to were excited about trout in wolf creek. It’s always fun to go to a new stream.”

Fett also said that he was hearing that as many as 30 anglers were on the banks throughout the morning on Saturday.

One of the concerns was maintaining social distancing in the era of COVID-19. However, an aspect of Wolf Creek that helped with that was the long shoreline of the creek.

“One thing everybody’s trying to do is social distancing,” Fett said. “There’s so much shoreline it’s pretty easy for people to keep their space. That was really good.”

DNR Conservation Officer Tony Flerlage also spent some time at Todd Park both Saturday and Sunday. Getting a chance to talk to some of the anglers, Flerlage was finding that people were enjoying the opportunity.

“Those that I talked to really were enjoying it,” Flerlage said. “They were thankful for a chance to go trout fishing.”

“Most I talked to were from Austin,” he added. “From Austin, the nearest creek is in Fillmore County … 30 minutes away. This was a chance to stay close to home, get the kids and families out and enjoy the beautiful day.”

The anglers taking advantage of the trout fishing opener were a mix of experienced anglers and those fishing for trout for the first time.

“There were some that knew what they were doing, taking advantage of the new water, and for some it was the first time,” Flerlage said.

Fett said the DNR is planning another stock in the fairly near future, but also said there are still opportunities until then.

“There were definitely fish caught on Sunday, but I don’t think they were cleaned out,” he said. “That’s a good note too.”

A journey for basketball

One of the worst days in Ruth Koang’s basketball life turned out to be the day that pushed her in... read more