Eagles still soar above the Mississippi River in southeast Minnesota. But along the banks of the river in Wabasha, the doors of the National Eagle Center are closed to visitors amid the pandemic.

With ticket sales halted and events canceled, the center has furloughed some staff and cut others’ hours — even as they continue to care for several resident eagles and produce online educational programs.

But as the shock of these first few weeks wears off, there’s a growing need to start adapting for the long haul. 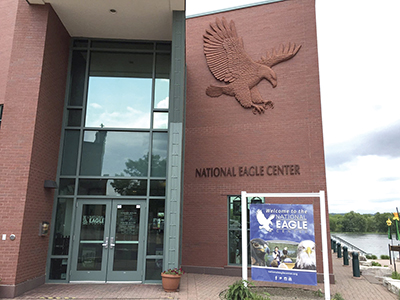 The National Eagle Center in Wabasha, Minn., as seen in 2017. The center is closed amid the coronavirus pandemic, so staff members therem and at nonprofits across Minnesota, are working to find ways to adapt for the long-term. Luke Taylor/MPR

“We need to do some reinvention here,” said CEO Meg Gammage-Tucker. She said the center needs to “figure out how we’re going to have a sustainable model that deals with the fact that we might not have the same amount of bodies walking in the door for a period of time.”

The Eagle Center has some advantages, with America’s national icon at the heart of its mission. Its educational videos have the opportunity to reach anyone in the world with internet access. Now, Gammage-Tucker said, the center must adapt its membership approach so that those viewers become financial supporters.

While circumstances are different for each of the more than 9,000 nonprofits across Minnesota, many share similar challenges.

In a recent nonprofit survey by the Dakota Medical Foundation across northwest Minnesota and North Dakota, 65 percent of the 134 organizations surveyed reported canceling significant fundraisers because of the pandemic. Half didn’t yet have plans to replace that lost revenue.

Kate Barr is the president of Propel Nonprofits, which serves organizations in Minnesota and surrounding states. She described this past month like weathering a storm.

“There’s a shared experience of this kind of fast-paced change; it’s just like standing on a beach and waves are hitting and hitting and hitting. And so leaders of nonprofits are frankly having to react to those waves as they hit,” she said.

While fundraising events are canceled, Barr said the need for some nonprofits’ services are increasing. Food shelves remain open and busy. Mental health and counseling services have shifted to telehealth, which cuts down on travel in rural areas but requires reliable home broadband access.

As for museums and groups focused on the arts and education, some have gone dark for now, or have postponed their season openings. Many have gone digital as they try to chart a new course.

What remains uncertain is when people will be able to come to large group gatherings, and when they will feel comfortable doing so.

Maxine Adams is executive director of the Lake Region Arts Council, which oversees arts grants to nine counties in west-central Minnesota. Adams said she reached out to each grantee in the region earlier this month. In addition to concerns about the immediate financial future, Adams said, the arts organizations she spoke to “are concerned about three months, six months, and a year out.

“Because they are not sure how audiences are going to react when the quarantine is lifted. How long is it going to take them to come back? Are they going to come back at the same level, because they’ve gotten used to things being available online? Will that be something that needs to be added to what is offered to the arts consumer?”

Adams said her agency is working with grantees as they repurpose or postpone their original projects. That flexibility was echoed by Vicki Chepulis with the Five Wings Arts Council in central Minnesota. Many of the organizations she works with have small budgets and are driven by volunteers.

“I think the question we’re really focused on is, what happens a year from now? Because so many of the funds that we receive are coming from the Legacy funds,” she said. “We all anticipate that that’s going to be significantly reduced, and that’s going to mean less dollars available.”

Those state Legacy Amendment funds are based on sales tax. Lower tax revenue means less money to distribute to arts and outdoors groups. An update on those numbers will be announced in June.

Meanwhile, around the state, nonprofits keep looking to today, tomorrow — and as far beyond that as they can. Lake Region Arts Council’s Maxine Adams finds comfort in the creativity of those with whom she works.

“The people that we work with in the arts world, they’re the creatives — and if anybody can come up with ways to adapt [it’s them]. I have great faith that they’re going to respond.”