The endorsing convention took place using computer and call-in options led by Republican Chairwoman Jennifer Hagedorn. Organizers said that despite the uncertain times and restrictions on meeting together, it was an opportunity to gather as a united political party to hear from future representatives and to be encouraged about work being done to protect the community and your freedoms. 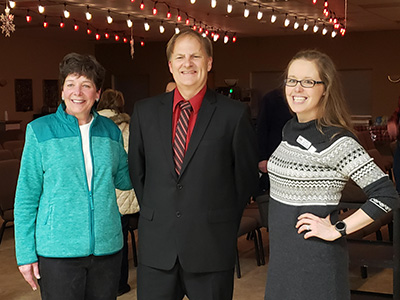 Dornink grew up on a family dairy farm, which led to a career in residential and commercial construction as a carpenter after graduating from Austin Vo-Tech (now Riverland Community College), where he became a Carpenter’s Local Union 1382 member.

In 2009, when the financial crisis hit the country, Dornink started his own small business using those skills and now works together with his family, which includes his wife of 35 years, Vicky, and 12 children.

As a candidate for the Minnesota Senate, Dornink hopes to bring a common sense return to southern Minnesota values and to be a voice of the people, working side-by-side with men and women to improve opportunities for the district and state.

Mueller grew up in a family deeply involved in music, church and the community, becoming a teacher after graduating from Winona State University.

Her 16 years of teaching have included Roseville, Blooming Prairie, China, Indiana, Owatonna and Austin High School, where she has been twice nominated for Teacher of the Year. She received her Masters Degree and is currently working on her doctorate in education leadership, hoping to improve educational literacy for secondary students.

She has been married to her husband, Dan, for 16 years. She has continued her involvement in music, church and community and is inviolved in the lives of her students and the multicultural community.

As a candidate for the Minnesota House, Patty hopes to  inspire her students and others to get involved in making a difference and bringing change when important issues are brought up. Her campaign motto is “To be Brave and to be Free,” where everyone is called to get involved and have their voice heard.

• Check out information about Gene Dornink on his Facebook page “Gene Dornink for Minnesota” or website, DorninkforSenate.com

• Check out more information on Patty Mueller from her Facebook and webpage with the same name, “MuellerforMinnesota.”

• Check out information about Peggy Bennett on her Facebook page at www.facebook.com/reppeggybennett/