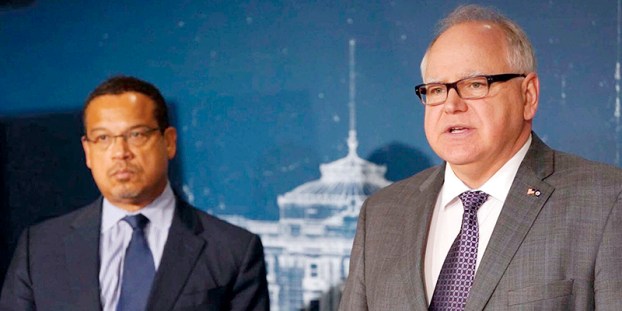 Gov. Tim Walz moved Friday to limit gatherings in Minnesota to fewer than 250 people and declared a “peacetime emergency” to heighten the state’s readiness to respond to COVID-19.

The event-size cap isn’t the kind of strict ban being ordered in some other states. Rather, it is being couched as recommended guidelines from the Minnesota Department of Health. It applies to things such as church services, youth sports events, business conferences and other gatherings.

Those cases remain travel-related with no evidence yet of community transmission, Health Commissioner Jan Malcolm told reporters. Still, she said the state needed to take action now to limit any spread.

“Stay home when you are sick,” she urged, noting that the coronavirus is spread largely from respiratory droplets from when an infected person coughs or sneezes, or when a person touches a contaminated surface and then touches their nose, eyes, or mouth.

Walz’s community mitigation steps also include strategies for Minnesota companies to adjust their workplace practices. Employers big and small have encouraged work-from-home arrangements or stepped up their sanitation efforts.

For now, the Walz administration isn’t ordering statewide school closures or putting places like the state Capitol off limits.

Walz said Friday the actions were “opening the toolbox” of government authority. “We’re not taking a tool out of it as of today, in terms of things we can do.”

Malcolm emphasized the gathering advisory is not a ban on people leaving home, shopping or going to public places such as malls, libraries or the airport but that “certainly people who are sick should stay home until they recover.”

The governor is leaving it to the Legislature to decide how to press on with its annual session, although there will be restrictions on rallies. Many groups have called off their Capitol lobby days preemptively.

But the 201 members of the Legislature aren’t the only occupants of the Capitol. There are dozens of staff, lobbyists and reporters who are in the building on a regular basis.

Minnesota is at the front end of the COVID-19 fight. So far there have been 14 cases with a presumptive positive test result and many more that have come back negative. But other states have seen their numbers spike as the coronavirus moved in.

The Walz declaration of a peacetime emergency is less ominous than it sounds. But the move opens up tools to Walz should he need them, such as a rapid deployment of the National Guard, use of armories as staging areas and quicker aid distribution.

As for his legislative requests related to COVID-19, Walz is hoping to reduce some barriers to testing, assist health care facilities in the first line of defense and tee up a response fund should the situation get dramatically worse. The governor is willing to extend the April 15 income tax filing deadline, and he’s exploring options for paid sick time for workers who otherwise couldn’t afford to give up shifts.

Earlier this week, the Legislature approved and Walz signed a law freeing up more than $20 million for public health officials at the state and local levels to combat the virus.

Rep. Tina Liebling, DFL-Rochester, the leader of the House health finance committee, said it was only an initial step.

“It was really to shore up the public health system,” she said. “That money is really not going to be sufficient to shore up our medical system.”

On the MPR News “Politics Friday” show, Liebling said she will seek $99.3 million for a fund to assist health care providers dealing with the crisis.

“This could blow up very, very quickly or it could play out over a longer period of time,” she said.

Sen. Jerry Relph, R-St. Cloud, said it’s important to set money aside now to head off problems later with an overwhelmed health care system. He deferred to his leadership on the amount that could be set aside.

“Remain calm,” Relph said on the MPR News show. “This is time for planning, not panic.”

RCC to suspend classes, use alternative delivery for rest of semester

Following a trend across the nation in the face of the COVID-19 global pandemic, Riverland Community College has decided to... read more