Veronica was born Sept. 19, 1923, on a farm near Stacyville, Iowa, the oldest of four daughters to Barney and Katherine (Schneider) Wagner. Ronnie was united in marriage to Harvey Anderson on Sept. 19, 1941 in Northwood, Iowa. 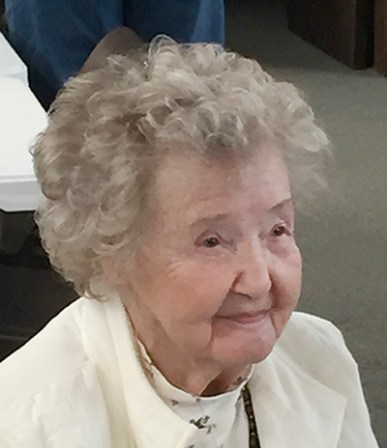 Ronnie lived most of her life in Carpenter. She worked at the Northwood Home and St. Ansgar Nursing Home while raising five children. She enjoyed gardening (especially her roses), embroidery, making jam, baking and cooking for her family. She loved traveling with her children and was able to see Niagara Falls, Washington D.C., Yellowstone, Grand Tetons and sites in California. One of her favorite trips was a trip to Santa Monica, California, to see her double cousin. She was a kind gentle soul who thought of others before herself. Ronnie enjoyed watching the Iowa Hawkeyes with her kids. She loved her Lord and enjoyed studying the Bible and read her devotions daily. She knew every book in the Bible and loved memorizing certain scriptures which gave her peace.

A celebration of life will be held at a later date and will be announced later. A private committal will be held with only the immediate family at the Deer Creek Lutheran Cemetery in Carpenter. Schroeder & Sites Funeral Home of St. Ansgar is assisting the family. Online condolences can be made at www.schroederandsites.com.