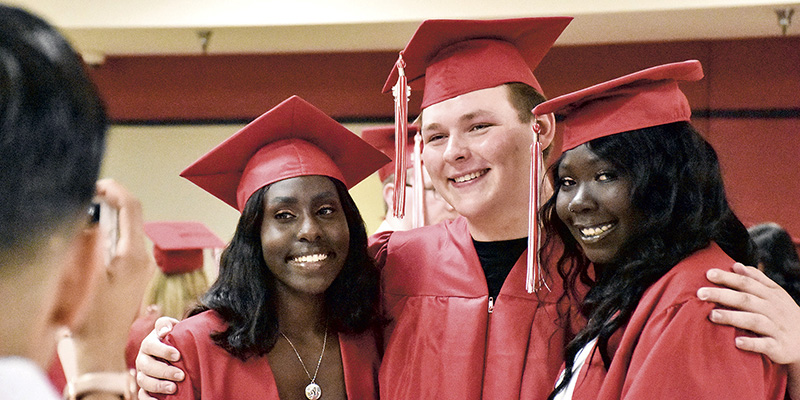 Although Austin High School graduation rates have been on the climb over the past few years, even John Alberts admitted that a 6 percent increase in the 2019 graduation rate surprised even him.

“You’re always hopeful that you will be successful,” and that hard work and a caring staff will result in an upward trend, said Alberts, executive director of educational services at Austin Public Schools. “But when we saw it was over 6 percent – that’s pretty dramatic.”

The Minnesota Department of Education released its report last Thursday on the graduation rates for 2019 seniors. Austin High School clocked in at 84.8 percent — also ahead of the state average of 83.7 percent —  a 6.1 percent increase over its 2018 graduation rate of 78.7 percent.

However, Alberts was not at all surprised at how the district got there.

“People are successful when you have people who believe in you; who tell you they believe in you and who are constantly supportive of you,” he said.

He added that there are myriad examples of how school staff, community members, parents and local organizations have worked to support Austin students.

“It could be from making sure a student has a way to get to school; to making sure a student is well-fed; or getting extra support in the classroom – it all starts with a very caring group of adults,” he said. “But the greatest degree of (appreciation) goes to the staff who work so hard and care so much.”

That work is particularly poignant given that there are additional challenges for staff, students and families in the Austin district. Almost 50 percent of the students are from different cultures; of those, about 13 percent are English Language Learners (ELL). ELL teachers work hard, he said, as do success coaches who work with both students and families to create an environment that fosters good learning. In the community, for example, Austin Aspires, a local non-profit organization founded to help broaden the educational experience, has also hired similar staff – called Navigators – to work with younger students and their families.

District teachers have a special something that makes sure students have the best educational experience, he added.

During their visit, he heard evaluators note more than once “about how caring our instructors were; how much they cared for their students,” he said.

Students who qualify for free and reduced meals were also more likely to graduate, with a graduation rate of almost 77 percent, compared to 69 percent in 2018.