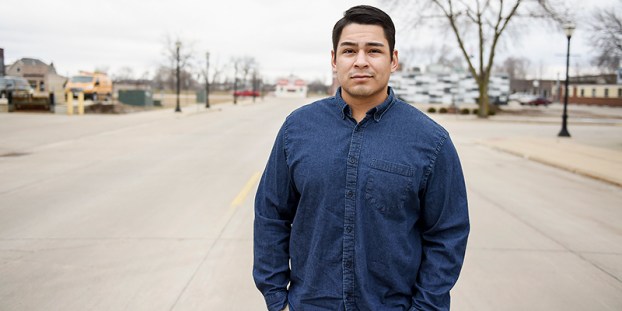 When Nexus Gerard Family Healing put out a call for help with supplies during the current COVID-19 pandemic, Herrera was among the first to step up with a $2,000 donation. Eric Johnson/photodesk@austindailyherald.com

Stepping up: When Nexus Gerard Family Healing sent out a call for help, Thomas Herrera led the way

Austin is often defined by its people’s willingness to help others when the need is there.

Thomas Herrera is no different, and when Nexus Gerard Family Healing reached out to the public for donations in purchasing various items to keep its residents busy during the COVID-19 pandemic, Herrera stepped up — and fast.

“Thomas Herrera, you are one in a million!” the post read.  “We made a post at 10 a.m. this morning, reaching out for donations to purchase video game systems, TVs, games, outdoor equipment, arts and craft supplies for our youth. By 11:30 a.m. Thomas was at Gerard, dropping off a check for $2,000. Words cannot express how grateful we are. Thank you.”

Herrera said he was working out that morning when he saw the post and didn’t hesitate to put things into motion.

“I sent a message to (Executive Director) Karen Wolf and then went to Wells Fargo to get a cashiers check and just gave it to them,” Herrera said. “They’re in a very, very tough time now.”

Herrera’s donation was one of several groups and organizations that reached out to help.

“People have really stepped up and have been helping us out,” said Executive Director Karen Wolf.

Nicole Fuller also donated masks and Drs. Elrod Green & Heimer, DDS donated toothbrushes. And the entertainment front, Josh Mueller donated three gaming systems all the way from Winona. A community member in Austin donated art kits that were brought out by Austin Area Arts Executive Director Laura Helle on Friday and Bonnie and Tim Rietz have also reached out to support Gerard with a monetary donation.

These are just some of the examples of people who stepped up to help out Gerard.

For Herrera, giving to a cause in need isn’t anything new. It started a few years ago when he began selling his own property and raising money through his mixed martial arts fighting.

All the money he raised went directly to whichever cause he was focused on. One of his prime causes was raising money and donating toys during the holidays, something he calls Operation Christmas Eve.

As he continued to raise money though, Herrera started to see another way.

“I’m a huge fan of autographed memorabilia,” he said. “Growing up I thought that was the coolest thing.”

After years of collecting autographed memorabilia, Herrera made the choice to start selling that stock to continue raising money for his causes. Last year alone he raised $21,000, which all went to Operation Christmas Eve.

While Herrera has given to causes throughout southern Minnesota, being able to help Gerard was a chance he couldn’t turn down.

“Gerard Academy is a program that’s near and dear to my heart,” Herrera said. “My focus from the very beginning has always been about helping children and teens in need.”

The idea that Gerard is a place for children to receive help is something Herrera believes in whole-heartedly. It was Gerard’s example, in fact, that helped guide Herrera through his recent path of giving.

“I believe Gerard is a great place for kids,” Herrera said. “All the staff do the best they can possibly do for the children there. As soon as I saw that, I started raising money for youth programs in Austin. I have been raising money for about a month now.”

It was from the money that Herrera had raised already that was gifted to the academy on Monday.

It was a chance to do one last something before Herrera, a member of the Minnesota National Guard, is deployed again to active duty.

“I wanted to leave the community something nice,” he said. “I wanted to be able to do something that provided some sense of relief.”

Through these gifts, Herrera said it’s important to send a message of hope to the children at Gerard.

For Wolf, the idea of so many people coming to Gerard’s aid is moving.

“I was really swept with a lot of emotion and gratitude,” she said. “Just grateful and appreciative that people are thinking of our youth.”