He served for 40 years impacting and inspiring countless young adults from this region to develop a curiosity for the natural world and find success in reaching their educational goals. 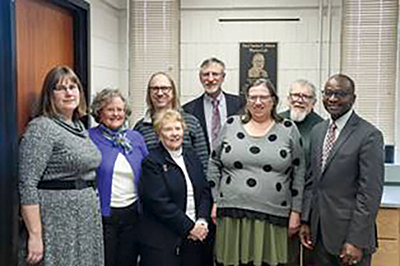 Jahren’s family and friends were present in the lab located in the East Building of the Austin Campus, Room N103, along with Riverland administration, faculty, staff, former faculty and students.

“It’s so fitting to honor someone who had this level of commitment to teaching by naming the Physics Lab at Riverland Community College,” said Riverland President Adenuga Atewologun. “We remember and proudly recognize his contributions by naming the Charles E. Jahren Physics Lab in his memory.”

“We are very thankful for the generosity of the Jahren family and friends,” said Janelle Koepke, dean of institutional advancement at Riverland. “Through their gifts an endowment fund has been established with the Riverland Community College Foundation.  This fund will exist in perpetuity and will provide annual support for the Physics program here at Riverland Community College.”

Charles was married to Ida Mae Guild at the Central Presbyterian Church in Austin on June 20, 1953. The Jahrens made their home in Austin, where Charles was a physics and mathematics instructor at the Austin Community College (now Riverland). He also worked in data collection with the Minnesota Geological Survey and as a physicist with the US Geological Survey.

The Charles E. Jahren Endowment Fund will provide ongoing financial resources to support the Physics program and allow opportunities for faculty to be innovative and creative in their teaching.  The fund is open and gifts may be given at any time to strengthen the legacy of teaching and learning that will occur in this lab.

The Dow Jones Industrial Average soared nearly 1,300 points, or 5 percent, Monday as stocks roared back from a seven-day... read more