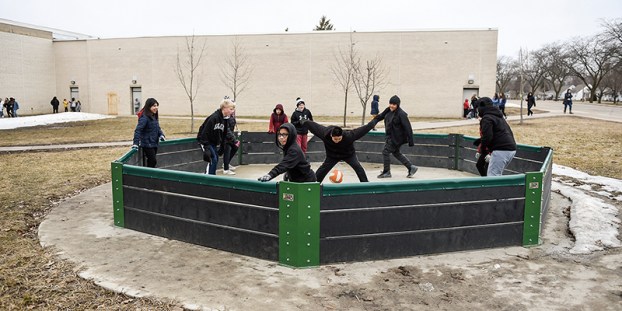 I.J. Holton Intermediate School students play Ga-Ga outside the school this past March. Gov. Tim Walz announced Thursday that schools in Minnesota would remained closed the rest of the year. Herald file photo

Plan for an unknown future

Since Gov. Tim Walz’s announcement Sunday that schools would be closed for an extended period of time starting Wednesday, districts around the state have been preparing for how they will continue education when the eight days are up.

The suspension of classes in the face of the COVID-19 global pandemic essentially lengthens spring break through March 27, when the state reexamines the situation, will ultimately require schools to make a decision to either continue education in classrooms or turn to online education platforms.

Education is scheduled to resume on March 30.

In letters released to the public Sunday, Austin Public Schools and Pacelli Catholic Schools will both be closed starting Wednesday, while outside of Austin some schools have already closed their doors.

“While children have proven to be less vulnerable to this virus (and) we haven’t seen significant spreading in our schools, we do anticipate that COVID-19 will have a sizable impact on our education system in the coming weeks, months and potentially the coming year,” Walz said Sunday. “We cannot wait until the pandemic is in our schools to figure things out.”

In Austin, administrators and staff are using Thursday and Friday to start putting a plan together should education resume, even if only online.

While this rather interesting scenario is providing schools across the state with several hurdles, Krenz said that staff are expanding the current abilities to educate at the school’s disposal.

“Most of it is just expanding what we’ve already put in the place in terms of technology and e-learning days,” Krenz said. “Expanding the lessons and opportunities that the instruction would be able to offer.”

As cases around the United States and in Minnesota continue to grow, Krenz said that the closing of schools is continuing a trend to limit groups in large numbers in an effort to help contain the virus spread.

As of Monday, there were 54 confirmed cases in at least 13 counties in Minnesota. Most cases are contained within Hennepin and Ramsey counties.

Nationwide, there are more than 3,853 cases.

One of the concerns shared by districts in the state and across the country is how to deal with those students who rely on meals through the district. Krenz said Austin will simply expand the plan it already had in place.

“We will provide similar to our summer lunch program,” he said. “Two sites where lunch is served will be provided. Expanding that, we will load buses provided by Palmer that will go out to the community for whoever needs that.”

The nature of the virus’ spread was a reason Krenz thought Walz’s move Sunday was the right course of action.

“I do, considering if you look at the exponential nature of the contagion our estimates here in the district — right now it’s pretty flat — but if you look at the way it works, at the end of this week it would take that steep curve upwards. I think Minnesota is trying to get out in front of that.”

During the time students are out, Krenz said the district will do what it’s always done for extended breaks when it comes to cleaning and that’s extensively go through the buildings within the district.

While Krenz can’t predict the future in terms of whether students will be in classrooms again or not this year, he does stress how important it is to have a good plan in place, looking at everything, including the possibility of empty seats.

“Our planning will take into consideration that we will go on past March 30,” he said.

As schools are put into the tough position of planning for an unknown future, Krenz is bolstered by the work of Austin’s staff in the face of the virus’ spread.

“I’m really encouraged by the willingness of our staff to step up, but also our community folks — Mayo, Hormel, QPP (those are just a few) — on how best to facilitate the actions that need to take place. People are willing to work together to ensure kids and parents are taken care of.”

In reaction to the announcement by Gov. Tim Walz Sunday to shutter schools across the state in response the COVID-19... read more