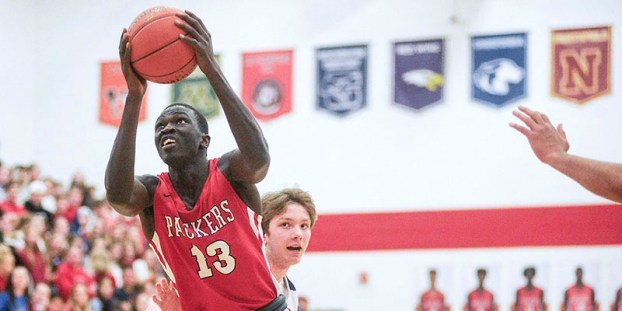 Pack on the attack: Moses Idris scores a double-double in playoff opener

Moses Idris came to play on both ends of the court as the Austin boys basketball team snapped out of a scoring slump at the right time to blow past No. 8 seeded Red Wing 78-44 in a Section 1AAA quarterfinal in Packer Gym Tuesday.

The top-seeded Packers (22-5 overall) hadn’t scored more than 62 points in a game in a month, but they found their rhythm early on to beat the Wingers (3-24 overall) for the third time this season.

Idris was a dominant force on both sides of the ball from the start for the Packers as he was blocking shots and ripping down rebounds on defense, while hitting an arsenal of face-up jump shots and post finishes on offense.

Idris had 17 points, 11 rebounds and three blocked shots in the first half alone and he finished with 19 points and 13 rebounds as he sat most of the second half when Austin pulled away.

“Big players make big names in sections and I just wanted to make an impact on the game and show what I can do. They didn’t have anybody our size that could guard us, so I was just looking to score and then kick out to my teammates that are open,” Idris said. “If we keep on moving the ball and playing defense, I feel like we will do very good things.” 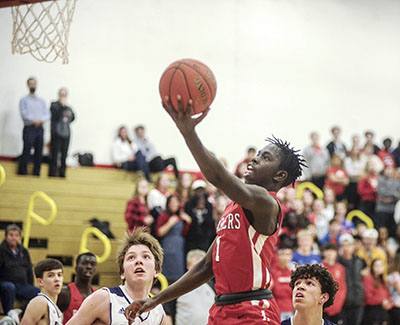 Austin’s Okey Okey floats in for a score against the Wingers in Packer Gym Tuesday. Rocky Hulne/sports@austindailyherald.com

Idris’ effort gave the Packers an early boost and Austin head coach Kris Fadness was pleased with the control that Idris showed on offense.

“(Moses) did a better job tonight of not dribbling so much and he did a better job of moving and passing the ball. It wasn’t just about his scoring,” Fadness said. “It was about passing and rebounding. He had his best game of his high school career probably tonight.”

The Wingers were hanging around early on as they were within 23-12, but the Packers used an 11-0 run to go up 34-12. Sophomore Emanuel Manyuon had a jam, Idris hit a three and Okey Okey finished a back-down post move during the rally.

Manyuon, a sophomore, had only played a handful of varsity minutes before Tuesday, but he poured in a career-high 14 points to go with two steals in the win.

Manyuon picked up all of the momentum he needed when he dunked on his first points of the night.

“When I got the steal, I said ‘I’m going to go up and do it.’ I was confident,” Manyuon said. “It was really exciting. It felt good to get in there and feel the atmosphere. We have a great vibe and our whole team is positive. We’re uplifting each other no matter what.” 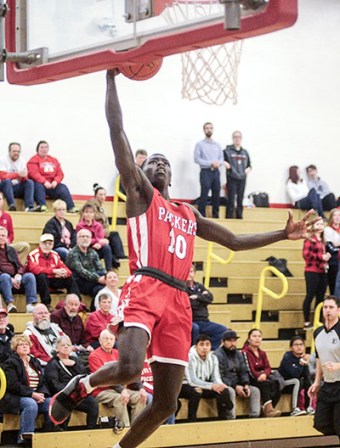 Emanuel Manuyuon goes up for a jam for the Packers in the first half against Red Wing in Packer Gym Tuesday. Rocky Hulne/sports@austindailyherald.com

Austin will host No. 4 Byron in the Section 1AAA semifinals at 7 p.m. Saturday. 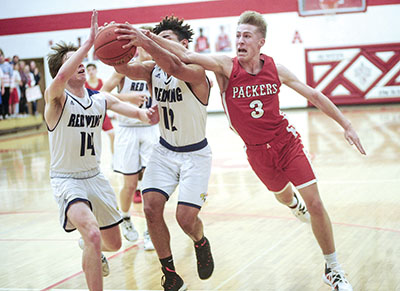 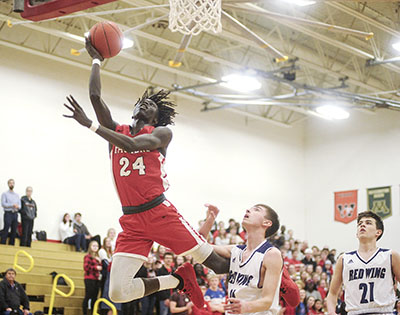 Agwa Nywesh takes it strong to the hoop against the Wingers in Packer Gym Tuesday. Rocky Hulne/sports@austindailyherald.com

Blossoms are one step closer: BP is aiming for its first state tournament since 1999