Our Opinion: Get excited about your local team

This time of year for high school athletes is always exciting. Playoffs.

This weekend, three of our area teams will be playing in a Section 1 championship and by the end of Friday night at least one area team will be in the Minnesota State Boys Basketball Tournament. In Section 1A, No. 1 seed Blooming Prairie will face No. 2 Hayfield at 6 p.m. Thursday; while in Section 1AAA, No. 1 seed Austin squares off against No. 2 seed Albert Lea at 8 p.m. Friday. 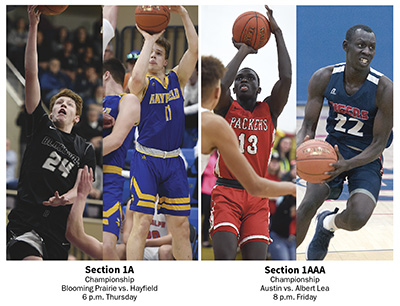 Both games are being played in Mayo Civic Center in Rochester.

These games are big moments on a big stage and a trip to a state tournament is a milestone for any high school athlete. It’s a chance to test skills on a state level against Minnesota’s remaining premiere teams.

Not only are these moments for high school athletes, but they are also big moments for the towns themselves; it’s a chance for the community to show their support for the student-athletes in their community.

We also have the chance to make these two games extra special. Not only do we have three area teams in a section title game, we could really count this as four. Albert Lea’s surge this year has been a jump from year’s past. There have been a number of recent seasons where the Tigers have struggled during the regular season as well as the playoffs, bouncing out early, but this season has been different.

Albert Lea has already defeated Austin once and nearly did it again toward the end of the regular season. Combine this with an Austin team that has set the standard for Section 1AAA success over the years and you have a contest that promises to be a good one.

The legislative session is moving quickly, and my colleagues and I have been hearing bills in committee and are beginning... read more