You may be familiar with the famous call “whoo, whoo-hoo, whoo, whoo” belonging to the majestic great horned owl. However, did you know that these owls are the earliest birds in the state to hatch their young?

March is prime time for great horned owls to hatch, although nesting can occur as early as December and January. In the dead of winter, great horned owls will start their courtship ritual and begin to establish a territory. 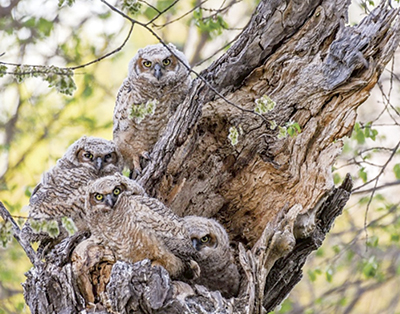 Great horned owls are starting to get out and about. Photo provided

These birds are generally very aggressive and will often take over the nest of other birds instead of building their own. In late January and February, they will lay their eggs and incubate them for a period of 28-35 days. Females usually lay a small clutch of 2-3 eggs.

Incubating eggs during February and March is a challenge due to fluctuating temperatures. Eggs must always be kept warm and if the eggs become too cold, they will not hatch.

So why do great horned owls nest so early if it carries a risk? As the largest North American owl species, the young develop slower than other birds. By nesting in the winter, great horned owls ensure that their young will be ready to leave the nest at the peak of spring. Hatching early allows more time to develop not only in size, but also for the young owlets to become master hunters. These owls have been nicknamed “tigers of the sky” due to their aggressive nature and ability to capture a wide variety of prey. They have an appetite for a wide range of small game like rabbits, squirrels, skunks, and other birds.

On numerous occasions they have been known to grab prey three to four times their own body weight. To aid in the hunt, great horned owls have an incredible sense of hearing. They can hear a small animal rustling in leaves at around 900 feet below them and even under a foot of snow.

Contrary to popular belief, the tufts on the top of their head are not ears. These tufts are called plumicorns and their function is to help the owl camouflage in trees as well as express behavior. The real ears of the owl are located underneath feathers on the side of their head. In addition to incredible hearing, great horned owls also have excellent eyesight that is triggered by movement.

A great horned owl is capable of spotting a mouse about a football field away, in both light and dark conditions. Its eyes are so large that they occupy 50 percent of the skull. If humans had the same eye to skull ratio as an owl, our eyes would be about the size of a grapefruit. The earlier great horned owls hatch, the more practice time they get to hone their senses and become proficient hunters.

Next time you are out on a walk near the woods, look up into the trees and see if you can spot the fluffy silhouette of a great horned owlet. They may look cute and fluffy now, but they will soon grow up to become true tigers of the sky.

March at the Nature Center

Spring and Summer Newsletter will be available by the end of the month.

By Alisa Roth A relatively new law in Minnesota has made it easier for first responders to claim workers’ compensation... read more