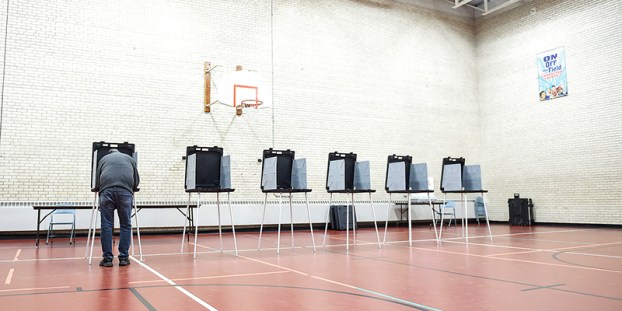 Fourteen states went to the polls Tuesday and Biden, who has been surging as of late, took wins in Minnesota, Alabama, Arkansas, Tennessee, Oklahoma, North Carolina and Virginia while Bernie Sanders captured wins in Vermont and Colorado.

This was the first year since 2019 that Minnesota has held a primary. For voters like Austin resident Pat Walter, the state opting to do a presidential primary is a good thing. 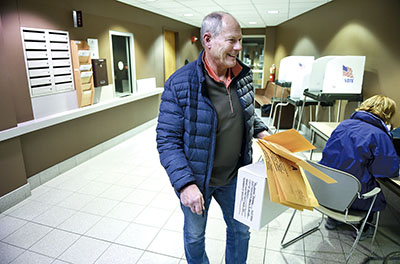 Jerry McCarthy brings in the first ballots of the night in the Minnesota primary Tuesday. Eric Johnson/photodesk@austindailyherald.com

“I think it’s a wonderful idea that people get a voice in what’s going on,” she said as she walked into Austin City Hall to cast her ballot. “I just hope people get out and vote. It’s our right and our duty.”

“We are very interested in how many people will actually come out to participate in this today,” she said. “It has been years since the state has done this and it will be interesting to see how many people will come out. There have been a lot of mail-in ballots, so that could affect the numbers today.”

“I think in Minnesota people are so used to the caucuses; it will be determined by the state if they do this again,” she added.

Frein said that there had not been any confusion among voters about having to select only one of the major parties’ ballots.

“It’s gone very smoothly,” she said. “People have found it easy to decide or they know their party, so we haven’t had any issues.”

Results from the election will go to the two political parties as well as the state.

“It will be interesting to see how they (the parties and state) feel that this went and if they will be doing this again,” Frein said.

The full extent of Super Tuesday’s results weren’t available by press time, but the final results, when tallied, could clear the field and bring into a little more focus who the frontrunner will be.

Texas and California account for 643 delegates between them — or about a third of the nearly 2,000 needed to clinch the nomination. In all, Super Tuesday offered 1,344 new delegates, or around 34 percent of all the total up for grabs nationwide.

Mower County’s precincts had yet to reveal its results, but Dodge County was overwhelmingly supporting Biden with 52 percent of the vote with half of the precincts reporting.

— The Associated Press, Michael Stoll and Eric Johnson contributed to this story

Riverland Community College students are getting another boost in their agriculture careers thanks to being a part of the Professional... read more