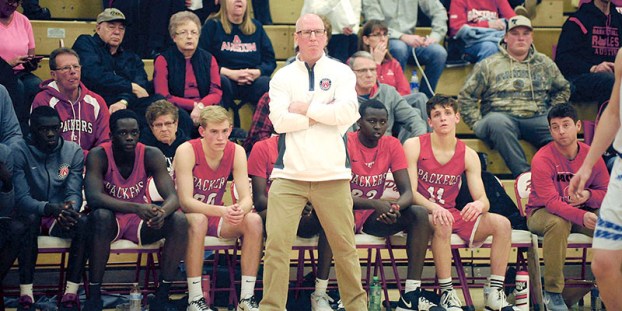 Austin head coach Kris Fadness looks on during a game in Packer Gym this season. Fadness has guided the Packers to six of the last eight state tournaments. Rocky Hulne/sports@austindailyherald.com

When Colorado State assistant men’s basketball coach Dave Thorson was looking for a way to break Tulsa’s press defense this season, he knew exactly what game-plan to use. He went back and looked at what he did while coaching DeLaSalle High School against his friend Austin head coach Kris Fadness.

“I didn’t spend minutes or hours preparing for (Austin’s press). I spent dozens of hours trying to figure out how to attack that zone,” Thorson said of Austin’s defense. “We were very fortunate (against Austin). That’s as tough of a defensive scheme as I’ve ever seen.”

Thorson knows Fadness as well as anyone as his Islanders beat Austin in the Minnesota Class AAA State Title game in 2013, 2014 and 2017. Fadness did score a big win over Thorson’s Islanders in the Class AA state title game while he was coaching Caledonia in 1997. Aaron Mittendorf had 45 points in that win for Caledonia, which beat the Islanders 69-47.

Thorson met Fadness while they were working coaching camps together at the University of Minnesota when they were both getting into coaching. Since then, Thorson leaned on Fadness for camaraderie and coaching advice.

“He continues to find a way to be a step ahead. I have so much respect for him and you couldn’t ask for a more loyal friend,” Thorson said of Fadness. “He’s got a great sense of putting players in positions where they can be successful on offense. He’s had some tremendous players, but the skill sets of those guys changed. The great coaches will put those players in position to be successful.”

Fadness has led Austin to six of the last eight state tournaments and the Packers are now chasing another trip to state when they play Albert Lea in the Section 1AAA title game at 8 p.m. Friday. When the Packers advanced to state in 2012, the program returned to the big stage after a 30-year hiatus.

Fadness’s skill as a coach is unquestioned by most in the state, but what many people don’t see is the number of hours that he puts in. Corey Christopherson is now an assistant coach at Eden Prairie, but he gained his basketball mindset while playing under Fadness in the early 2000s and then coaching under him as an assistant.

Christopherson said the Packers never played a single possession of zone defense when he played and Austin’s switch to the 1-2-2 trapping defense is a testament on how versatile Fadness is willing to be.

“When you step away and look at it from the outside lens, you realize how good he is,” Christopherson said. “He’s a worker. He puts in more time than anyone knows. He’s up very high on the list as a role model and mentor. He’s been nothing but a positive for me in my life.”

Suzy Hebrink is as attached to basketball as anyone in the community. The former Riverland Community College head women’s coach has had six children involved in basketball including her sons Seth and Tate, who played for Fadness. 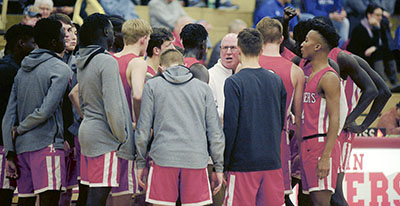 Austin head coach Kris Fadness speaks to his team during a huddle in Packer Gym this season. Rocky Hulne/sports@austindailyherald.com

She has memories of him picking up kids in his van at 6 a.m. in the summer, even if it meant waiting outside their house for them to get ready.

“We appreciate his grind each and every year and he does it because he loves it. There is a lot of energy that he puts into the program and I’m sure the players who go on, really appreciate it,” Hebrink said. “There isn’t a coach that knows Fads that doesn’t have a tremendous amount of respect and appreciation for him. And in the coaching field that is, without a doubt, earned. When you coach for the right reasons and know how to teach the game while improving players and building a program, it’s obvious.”

Now that Christopherson has been working around basketball in the metro for a few years, he can attest that Fadness has gained the respect of the majority of the basketball minds of the state. That respect certainly hasn’t come from any bragging from Fadness.

“He doesn’t do it for self promotion. He loves basketball and he’s a teacher,” Christopherson said. “That’s who is. Kids see that and they want to be around the gym for someone who loves the game. Kids feel valued and appreciated when they’re around him.”

The impact Fadness has had will likely be felt for years to come as many Packers have gone on to play in college recently. Austin senior guard Pierre Lilly said that all of Austin has benefited from Fadness’s contributions.

“He’s a really good role model for everybody,” Lilly said. “He helps a lot of kids in the community and he keeps them out of trouble. He gives us something to do in the summer where we can just hoop with him. He’s a big influence on everybody in this town.”