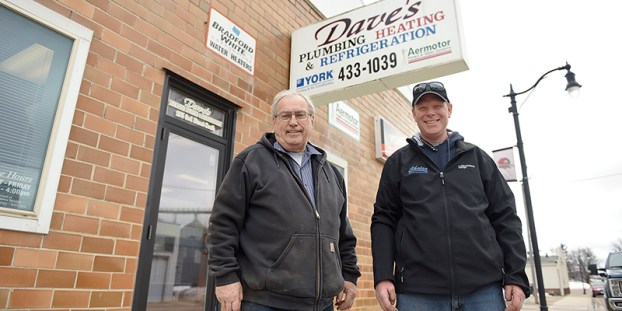 A lot has changed for Dave Whalen since opening Dave’s Plumbing Heating and Refrigeration in Rose Creek in 1978, and now it’s Whalen’s turn to change.

Whalen has sold the business to Rory Evans, who owns Choice Heating and Air Conditioning out of Racine, and for the first time in 42 years, Whalen will be an employee rather than a boss, staying on until Evans can complete training for plumbing.

Whalen opened Dave’s after working at Hormel. Having been laid off, Whalen was looking for a new start in life and with 10 years remaining on his G.I. Bill, he had just enough time to get the training necessary.

“I had just enough time to go to school,” Whalen said. “I had a 52-week layoff notice, so I took my severance pay and went back to school.”

Whalen spent time working at businesses in Albert Lea and Stacyville, Iowa, as he was going to school before deciding he needed a change in life. It was another prominent Rose Creek name that helped push Whalen to opening his own business.

“It was time for a change,” Whalen remembered. “I had the push from Stan Ulven who said, ‘start your own business here.’”

Whalen resisted at first, but ultimately made the jump.

“Ninety-nine percent (of customers) have been damn good … Whalen said. “I’ve got some good customers that have become friends. It’s been a helluva ride. I’ve been working for some people since I’ve started here.”

Evans started his business in 1997 and the two met each other about 10 years ago. Talk of selling the business to Evans started as a joke at first, but grew more serious in more recent years. Last year that talk became a little more serious.

“Last summer he started asking for a little bit of help and that turned into a conversation of taking over the business a little more seriously,” Evans said. “I realized he had the same customers I have, operates the same way and sells the same items.”

As Evans works to gain his licenses for plumbing and wells, he doesn’t suspect much will change in terms of the business itself. However, he did say there are other avenues the business could get into including more commercial projects. In essence, he sees the possibility of growth.

“I see it growing,” Evans said. “I think there is a bigger demand than ever for this.” 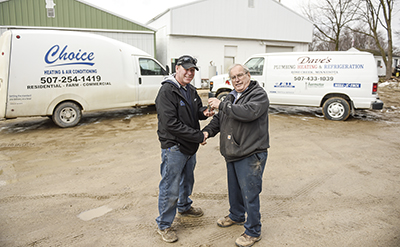 Dave Whalen, right, and Rory Evans exchange the keys to Dave’s Plumbing Heating and Refrigeration. Whalen sold the business to Evans at the start of this month. Eric Johnson/photodesk@austindailyherald.com

Part of that growth will come from a combining of labor between the two businesses, but both Whalen and Evans think people are starting to realize that box stores can’t offer the same service and quality that small businesses like Dave and Choice can offer.

“People are getting wise to them,” Whalen said. “They aren’t buying our products, they are buying our service.”

Either way, the simple answer is that customers can still expect the care from Dave’s that they have received over its long years of business.

“I don’t know what we can improve, but people will get the same great service and professional service,” Evans said.

Plan for an unknown future