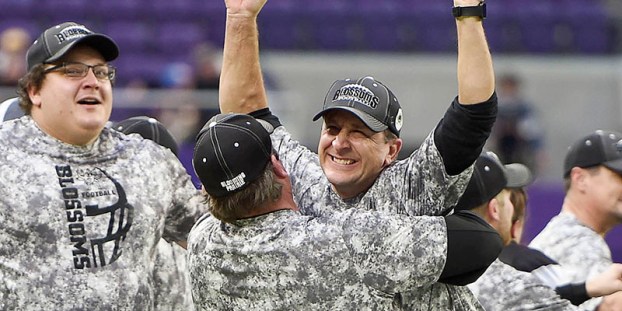 Head coach Chad Gimbel is hoisted into the air after Blooming Prairie claimed the Class A Prep Bowl over BOLD last fall at US Bank Stadium. Herald file photo

In Blooming Prairie — it’s one team

BLOOMING PRAIRIE — The Awesome Blossoms may have fielded the best team in school history when it won its first state championship last fall, but the credit goes far beyond the players on the field.

Blooming Prairie head coach Chad Gimbel, who was recently named Class A and overall Head Coach of the Year by the Minnesota Football Coach’s Association, points to the dedication of his assistant coaches, former players, and even the town for the success the team has found over the last decade, which included advancing to the state quarterfinals in 2018.

Gimbel began as head coach in the fall of 1997 and has put together a record of 178-65 overall in BP, which is the only school at which he’s ever coached.

He has a system that has been in place and a veteran coaching staff, that includes three of his former players.

“It really has come down to our coaches. We’ve been together for quite awhile. We all know what needs to be done and we all know the system. We keep growing together and we work so well together,” Gimbel said. “A lot of things have changed and Matt (Kittelson) puts so much time and effort into it and he works hard.”

Kittelson graduated from BP in 1997 and he played for the Blossoms when Gimbel was an assistant coach. He has now coached with Gimbel since the 2007 season. About the only change he’s seen in Gimbel over the last two decades is that the head coach has mellowed out a little bit over time.

“He’s just a very level headed, positive presence. He’s intense because he’s passionate, but he also just has this calm about him. He gives you confidence being around him. When he talks, he’s a guy you want to listen to,” Kittelson said of Gimbel. “One of the best things that he does is that we run the same system and he’s very good at finding the kids’ talent level and building on their strengths so they can contribute. He tailors the system to the kids.”

While the Blossoms have been a threat to get to state for the last decade, it wasn’t always that way. Kittelson said BP was usually around .500 before the arrival of Gimbel, who has led the program to new heights in recent years.

“He had a goal, he had a vision and he knew what we had to do,” Kittelson said. “Eventually, everything kind of came to fruition.”

Gimbel hopes that BP’s state football title shows every athletic program in BP that it is possible to win a state title. He’s also happy that he stuck with the Blossoms more than two decades.

Gimbel is originally from lake country in central Minnesota and that’s where he thought he would end up, but BP roped him in at a young age and he hasn’t looked back since.

When the Austin Packer dance team took third place and earned a medal in high kick this at the Minnesota... read more