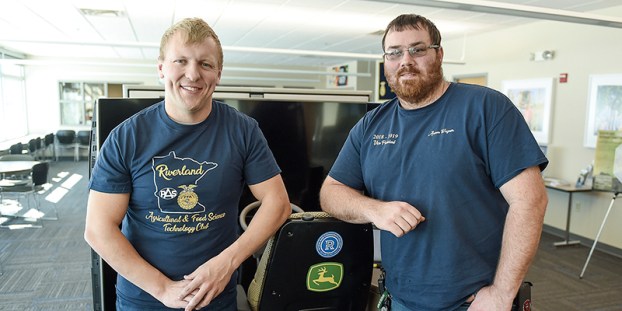 Riverland Community College ag intructor Nick Schlitz, left, and RCC student Aaron Wagner are photographed at Riverland. Wagner has made use of the National Professional Agricultural Student Organization to network and further the ag instruction of RCC students. Eric Johnson/photodesk@austindailyherald.com

Riverland Community College students are getting another boost in their agriculture careers thanks to being a part of the Professional Agricultural Student (PAS) organization.

Similar to Future Farmers of American  PAS provides a platform of learning and connection that will eventually come to help students going into agriculture. This is the second year RCC students have been a part of PAS.

“I’m proud to see Aaron and Sam capitalize on these opportunities to show their premier agriculture leadership and expand on what they learn in the classroom,” said Riverland instructor Nick Schlitz.

PAS is more than a conference, though. It’s a chance to apply what they’ve learned to real life opportunities, which includes seminars and competitions at the conferences as well as trips to agricultural producing facilities that apply directly to what they are studying.

In short, it’s a connection students will ultimately need.

“It’s an organization that ties directly to the industry,” Wagner said. “PAS works really close to all industries across the United States. You network and will know people in agriculture across the whole country. It’s something we really wanted to be a part of.”

The state conference, held in February, provided these first steps, including those seminars and contests which pitted RCC students against students from other colleges and universities.

Some of the seminars included current and relevant topics such as “What’s Next in Digital Agriculture” and “Dealing with Difficulties in Farming.”

“We use real literature and information that actual people use in the field to complete the tests,” Wagner said. “There’s a lot of interview styles for different ag careers.”

PAS also serves as a bridge to expanding that knowledge, tapping into a well established goal of Riverland that its students not just be knowledgeable in their agricultural careers, but be ready to expand that knowledge.

“With a lot of our student life clubs, we want to see what organizations would provide the maximum benefit for our students,” Schlitz said. “PAS affords us a chance to further promote ag education and ag leadership.”

While the education benefits are readily apparent, it only tells half the story. The provided networking is equally important as students begin preparing for a step out into the industry.

“I currently farm, so I want to expand my knowledge so I can use it myself, but I also want to share that knowledge with someone else,” Wagner said. “I enjoy the networking. National PAS representatives were there because Minnesota is a large hub. We got to meet them and we’ve gone to several meetings.”

It’s those benefits that can follow students after graduation, giving them a leg up on either finding a job or continuing a job in a better way thanks to the extra opportunities PAS provides.

That extra step becomes a little more important with the changing face of farming, pushed along by technology.

“I strongly encourage students to get involved as much as they can FFA and PAS,” Schlitz said. “It allows them to connect the dots with what they’re taught in the classroom and how it’s applied in the field. It will allow you to find opportunities for employees and be able to take it to the next step. They see there is a rhyme and reason why they are taught this in a class.”

Klobuchar is ending her presidential bid, will endorse Biden