Clarence was born on July 17, 1922, on the family farm southwest of Osage, the son of Peter and Rose (Hemann) Ginder. He graduated from eighth grade at the parochial school in Meyer in 1937. 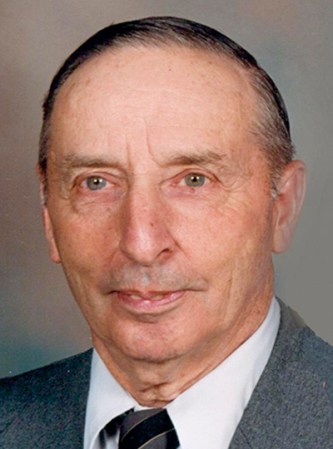 Clarence served for two years in the Civilian Conservation Corps in Decorah, Iowa. From there, he spent 38 months in World War II in the U.S. Army Air Corps (U.S. Air Force). On Aug. 19, 1972, he married Ruth (Linda) Weldin at Sacred Heart Church in Osage. He worked for Oliver Tractor in Charles City, Iowa, did construction for various contractors, and worked for Kensett Homes for the 13 years prior to his retirement. Clarence was a member of Sacred Heart Catholic Church and the Knights of Columbus. He was a member of Osage V.F.W. Post 7920 and Osage American Legion Post 278 for over 60 years. Clarence enjoyed woodworking, gardening, reading, playing “500,” dominoes, and cribbage.

Due to government regulations regarding the coronavirus, there will be no services at his time. A memorial Mass for Clarence and Ruth will take place at the time of Ruth’s passing.