On Saturday afternoon, Umpaowastowin — or Pat Northrup, as she’s known in English — prepared to dance.

Wearing a maroon dress with rows of metal cones stitched all around her skirt, she offered tobacco to friends and family members who had come to her small Cloquet apartment.

“You just have to take a little pinch,” she instructed. “When you get done with that, we’ll put it on our spirit plate.”

Then, at precisely 1 p.m., she started playing music on her cellphone, which she’d propped up on a small table.

Two friends, her daughter and her granddaughter stood in a small circle as she slowly danced, her moccasin-clad feet lightly tapping to the beat of the drum. She held a pinch of tobacco high with one hand, the cones on her dress tinkling. 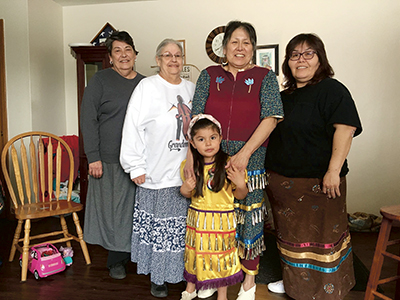 “We were not only dancing for our healing, but also to guide our scientists and physicians, into finding a cure, or help for the people. So this wasn’t just for us, it’s for everybody,” explained Manidooniibikwe, or Barb Rodaks, a member of the Fond du Lac Ojibwe band who danced with Northrup.

For weeks, the world has grappled with the rapid spread of the new coronavirus. Italy is under quarantine. The U.S. has declared a national state of emergency.

In Minnesota, schools are temporarily closed, many hospitals and nursing homes are banning visitors, and the number of confirmed cases rises daily. The World Health Organization has declared the outbreak a pandemic, and the U.S. Centers for Disease Control and Prevention have warned that older adults and people with underlying health conditions are especially at risk.

“Me, being an elder, I worry about it,” said Migizigabowekwe, or Vicky Ellis, another friend who danced with Northrup. “Everybody’s just afraid, and I have a sister who has really bad lungs. I’m doing this for her.”

The jingle dress dance is a dance of healing. Usually it’s performed at pow wows by groups of women. But at this moment of social distancing, Northrup thought a virtual dance is exactly the healing the world needs. Someone posted it on Facebook with the hashtag #jinglehealing. They set a time: Saturday, at 1 p.m.

“Wear your jingle dress at home and be connected,” the posting said. “Remember the reason we were given this dance.”

Native American women from Pennsylvania to Nebraska to Ontario to Northrup’s apartment in northern Minnesota joined in.

The jingle dress dance originated with the Ojibwe people, or Anishinaabe, in the early 1900s. There are different versions of the story about how the dance began. But they all include a little girl who was very sick. Her father had a dream about a dance that would make her better. She wore a dress lined with rows of silver cones. The sound of the jingles healed her.

The sacred dance has since been taken up by women throughout Indian County, after it spread through the pow wow circuit in the 1980s.

“This isn’t just an Anishinaabe prayer. This is an ‘all-people’ prayer,” said Northrup, 70, who is Dakota, widow of the late Ojibwe author Jim Northrup.

“The virus isn’t going to have prejudice,” she said. It will affect all people. “So that’s what the prayers are for.”

“We literally say that dancing is prayer. That every step you take is prayer,” she said.

Hakala-Beeksma, a member of the Grand Portage Band of Lake Superior Ojibwe, started dancing about 15 years ago. She sewed about 150 copper cones on to her purple dress herself.

“That tinkling sound, that kind of sounds like water, like rain — that’s the healing part that comes in,” she said, “water being sacred and cleansing.”

When you become a jingle dress dancer, there’s a responsibility that comes with it, she said. “You’re dancing for the healing of your people.”

As a member of the Red Lake Nation who grew up watching her grandmother dance, Brenda Child was curious about the dance’s historic origins. She is a historian and American Indian Studies professor at the University of Minnesota, and she helped put together an exhibit on the 100-year story of the jingle dress at the Minnesota Historical Society’s Mille Lacs Indian museum.

“I went looking for photographs, and I was sort of surprised to see that I couldn’t find, really, a single photograph of what you would call a jingle dress before circa 1920 in the United States or Canada,” she explained.

“And it just occurred to me what Ojibwe people began creating this tradition around was related to the big influenza pandemic of 1918-19,” she said.

Ojibwe women were defying the U.S. government when they developed the dance, Child said. At the time, the government forbade ritualistic dancing on reservations.

“They were doing the kinds of cultural things … that they knew helped them through terrible times,” said Child. “And Ojibwe people believe in the healing power of music and dance — that music and dance are not just something we enjoy that are pleasant. But it’s very integrated into Ojibwe culture. It’s very much a part of how we live.”

This weekend’s virtual jingle dress dance was proof of that. Pat Northrup said she was blown away at the response.

“I got a little emotional that so many people care,” she said.

So a century after that first pandemic when they danced as a prayer for healing, women from Minnesota and Wisconsin, Utah and Colorado, Kentucky and all around Canada — danced again, praying for healing.

U.S. hospitals bracing for a possible onslaught of coronavirus patients with pneumonia and other breathing difficulties could face a critical... read more